They’ve been friends their entire collegiate career at Purdue. Harvey has been interested in flying the race since she heard stories from her first flight instructor at Purdue.

“She would tell me stories about flying in the Air Race Classic and I remember thinking it would the best thing to do,” Harvey said. “Now, four years later and here we are.”

For the second year in a row, two teams of Purdue students will take to the skies to compete in the annual women’s cross-country competition.

This is the third race since 2005 in which more than one Purdue student team has entered the race. It is the only women’s air race in the United States. 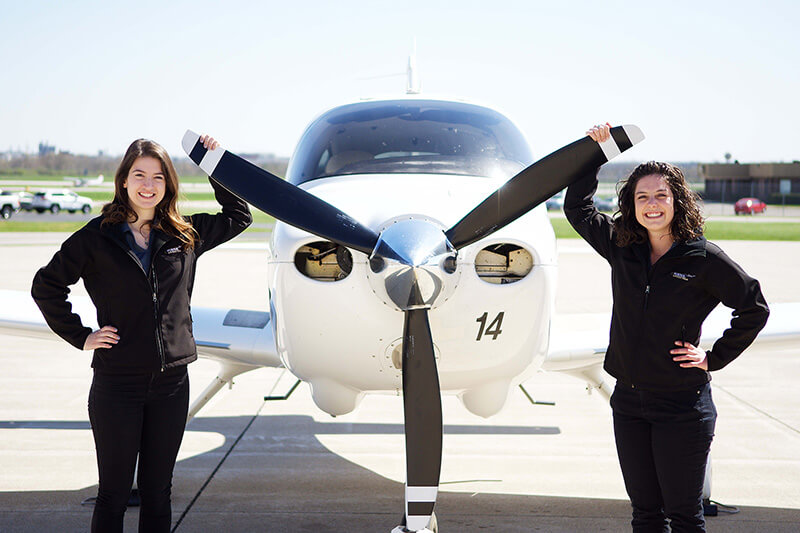 Pilot Alyssa Harvey and her co-pilot Tiffany Imhoff, both seniors in Purdue’s Professional Flight program, will be representing the university among a field of 55 teams in this year’s Air Race Classic. (Photo/Christopher Konecnik) Download image

The race takes place from June 19-22 and runs a total of 2,656 miles. Pilots, which follow a different route for the race each year, begin in Sweetwater, Texas, and end in Fryeburg, Maine, with stops in eight states along the way.

Purdue has been represented by a team in the Air Race Classic for more than 20 years. This year’s field consists of 55 teams, with 119 racers from 34 states and 5 foreign countries.

Fala said her excitement kept her from sleeping the night before last year’s race and she could eat very little. Everything changes, however, once they take off.

“I think the most stressful time is sitting on the ground waiting to take off,” she said. “But the moment you take off, everything is so normal, just like any other flight. The stress just all goes away, it just disappears.”

Fala is a doctoral student while Troyer will be pursuing her master’s degree in the fall. Pietruch is a junior in the School of Aeronautics and Astronautics. 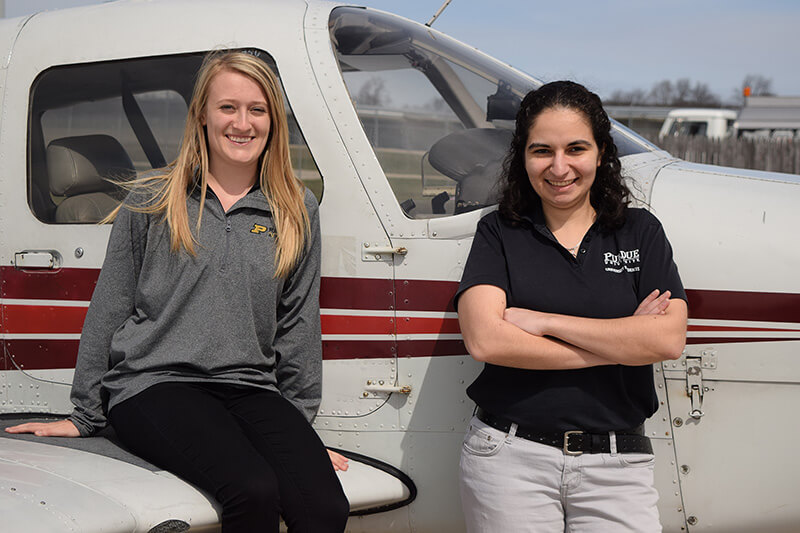 Pilot Nicoletta Fala, a doctoral student in the School of Aeronautics and Astronautics, and co-pilot Cathy Troyer, who is pursuing her master’s degree in aviation management, make up the second team of Purdue students participating in the Air Race Classic. (Photo/Purdue Pilots Inc.) Download image

The west-east route this year makes maximizing tail winds among the strategies for teams. The Air Race Classic follows a different route every year.

“A lot of times last year the chances of rain didn’t become rain so we changed our whole strategy for nothing,” Harvey said. “We’re going to change our strategy this year, but not to the point of being overly aggressive.

In addition to the pilot and co-pilot, a ground crew works to give racers the best and fastest route for their journey. Crew members analyze weather conditions, including winds and front locations, as well as forecasts and hazardous weather. The crew also calculates fuel burn and helps with decisions on whether to try flying the next leg of the race or wait for better weather.

Fala said the level of cooperation between racers was something she didn’t expect going into last year’s race.

“I learned that it’s not a competition against each other,” she said. “We’re all in it to win it, but we know everyone is willing to help each other out. It was a huge change in mentality for me and I didn’t expect it at all. We still want to do well this year, but we want to help everyone else too.”

The event is not your standard race. Each plane receives a unique time handicap prior to the race. The team that beats its handicap by the largest margin wins.

About the Air Race Classic

The first race took place in 1929, originally called the Women’s Air Derby and included a field of 20 women pilots that included Amelia Earhart, who would later join the faculty at Purdue University. That race flew from Santa Monica, California, to the Cleveland Air Races in Ohio. The All Women's Transcontinental Air Race (Powder Puff Derby) was formed in 1948 and ran until 1977. The ARC ran its first race in 1977 with a 2,400-mile race from Santa Rosa, California, to Toledo, Ohio, and is the longest running air race in the U.S.