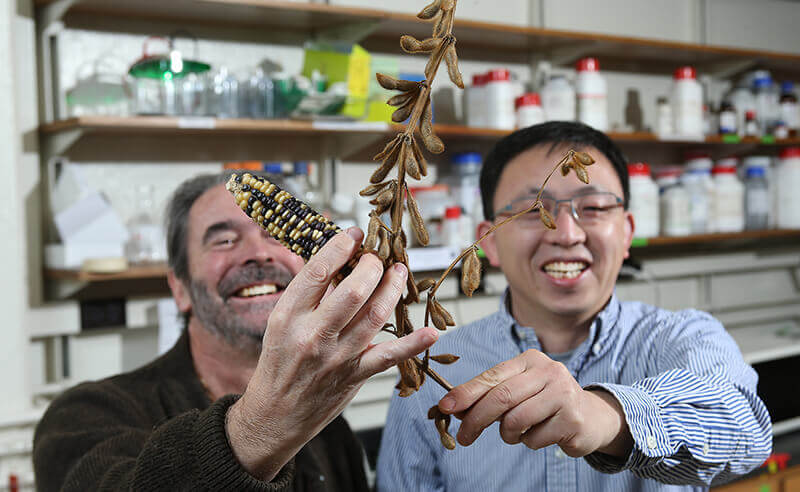 Purdue University researchers Damon Lisch (left) and Jianxin Ma have found that while soybean and maize genomes doubled around the same time, they did so in different ways (Purdue Agricultural Communication photo/Tom Campbell). Download image

In maize, Lisch and Ma believe the duplication happened when two species of grass with similar genomes crossed, like distant cousins. The genome from one plant was dominant, and over time, lost redundant copies of genes at a far lower rate than the other.

“You don’t need two copies of everything,” Lisch said. “And there are many examples of differences in the loss of redundant genes when a whole genome duplication results from crosses between related species.”

Lisch and Ma, whose findings were published in the journal The Plant Cell, suggest that those differences arose from differences in the number and distribution of transposons in the two genomes when they were first combined.

Transposons, or so-called “jumping genes,” move around DNA and threaten to alter or damage other genes. The plant defends against those transposons by turning off their activity, sometimes reducing the level of expression of genes around them. Lisch and Ma said the lost genes in maize tend to be from the same subgenome and exhibit differences in both transposons next to genes and levels of expression of those genes.

“If you’re a gene and you have a transposon near that’s been turned off, that can turn down the gene as well,” Lisch said. “There’s a benefit to turning down the transposons, but there’s also a cost. The data from maize suggests that one of the two genomes that combined to form the maize genome was paying more of a cost. Because of this, genes in this genome expressed at a lower level and were more likely to be lost over time.”

Soybeans, however, have lost genes from both genomes at about the same rate.

“That suggests that when the two genomes that came together to form the soybean genome, they were basically identical,” Lisch said.

The authors’ findings suggest that soybean’s genome duplication came not from a cross of distant relatives, but from the plant’s own genome spontaneously doubling.

Understanding the role transposons play on the evolution of genomes can help scientists understand how plants make compromises within those genomes.

“This provides insights on how duplicated genomes have changed and how those changes may have affected the plant’s phenotype as we observe it today,” Ma said. “This may facilitate discoveries in gene networks as we analyze traits of agronomic importance.”

The United Soybean Board, Indiana Soybean Alliance, Agriculture and Food Research Initiative of the U.S. Department of Agriculture National Institute of Food and Agriculture, and the National Science Foundation supported this research.

Polyploidy is an important feature of plant genomes, but the nature of many polyploidization events remains to be elucidated. Here we demonstrate that the evolutionary fates of the subgenomes in maize (Zea mays) and soybean (Glycine max) have followed different trajectories. One subgenome has been subject to relaxed selection, lower levels of gene expression, higher rates of transposable element accumulation and more small interfering RNAs and DNA methylation around genes, and higher rates of gene loss in maize, whereas none of these features were observed in soybean. Nevertheless, individual gene pairs exhibit differentiation with respect to these features in both species. In addition, we observed a higher number of chromosomal rearrangements and higher frequency of retention of duplicated genes in soybean than in maize. Furthermore, soybean "singletons" were found to be more frequently tandemly duplicated than "duplicates" in soybean, which may, to some extent, counteract the genome imbalance caused by gene loss. We propose that unlike in maize, in which two subgenomes were distinct prior to the allotetraploidization event and thus experienced global differences in selective constraints, in soybean, the two subgenomes were far less distinct prior to polyploidazation, such that individual gene pairs, rather than subgenomes, experienced stochastic differences over longer periods of time, resulting in retention of the majority of duplicates.