Heterostructures are made by stacking layers of two-dimensional materials. Here, the researchers stacked two very thin materials, tungsten disulfide and graphene, to see if they would work together to create electricity.

“If you wanted to add a different material on top of silicon, which is often used in solar cells, it would be very difficult because there would be a mismatch between the materials,” said Libai Huang, a professor of chemistry in Purdue’s College of Science, who led the research. “But these atomically thin layers allow you to build like Legos. This opens up a lot of new ways of designing functionality.”

Graphene, which is a form of carbon, is good at moving electrons. Carbon atoms form bonds that electrons can use to move around quickly; the faster the electrons move, the more efficient the electrical current they create. For comparison, electrons can move more than 1,000 times faster in graphene than in silicon.

Using the interaction between graphene and tungsten disulfide to generate a current, though, was a new idea.

The applications aren’t just limited to solar cells, said Huang. This mechanism could be used to create new properties in materials used in transistors, sensors and more.

The research was published in Science Advances. 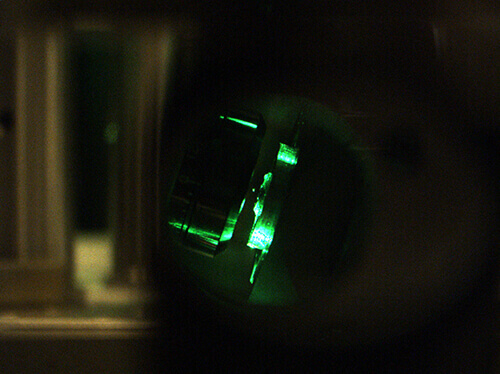 WEST LAFAYETTE, Ind. — Researchers at Purdue University have performed the first experimental tests of several fundamental theorems in thermodynamics, verifying the relationship between them and providing a better understanding of how nanoparticles behave under fluctuation.

As a system gets smaller, fluctuations away from equilibrium begin to dominate its behavior. This makes the data from experiments in small systems, such as biological molecular motors and nanoscale magnets, messy and difficult to make sense of. Fluctuation theorems help researchers make sense of the fluctuations in these systems.

Fluctuation theorems are refinements of the second law of thermodynamics, which states that all kinds of energy in the material world disperses if it is not hindered from doing so.

A team of researchers from Purdue and Peking University, led by Tongcang Li, assistant professor of physics and astronomy at Purdue, tested the differential fluctuation theorem for work production and several other theorems. They levitated a nanoparticle in a vacuum chamber with a laser, using a tiny optical tweezer to measure instantaneous position and velocity. This mechanism allows them to trap the nanoparticle in air continuously for weeks or months and acquire large sets of data.

The research was published in Physical Review Letters.