Mosquito gut may hold the key to preventing Dengue and Zika 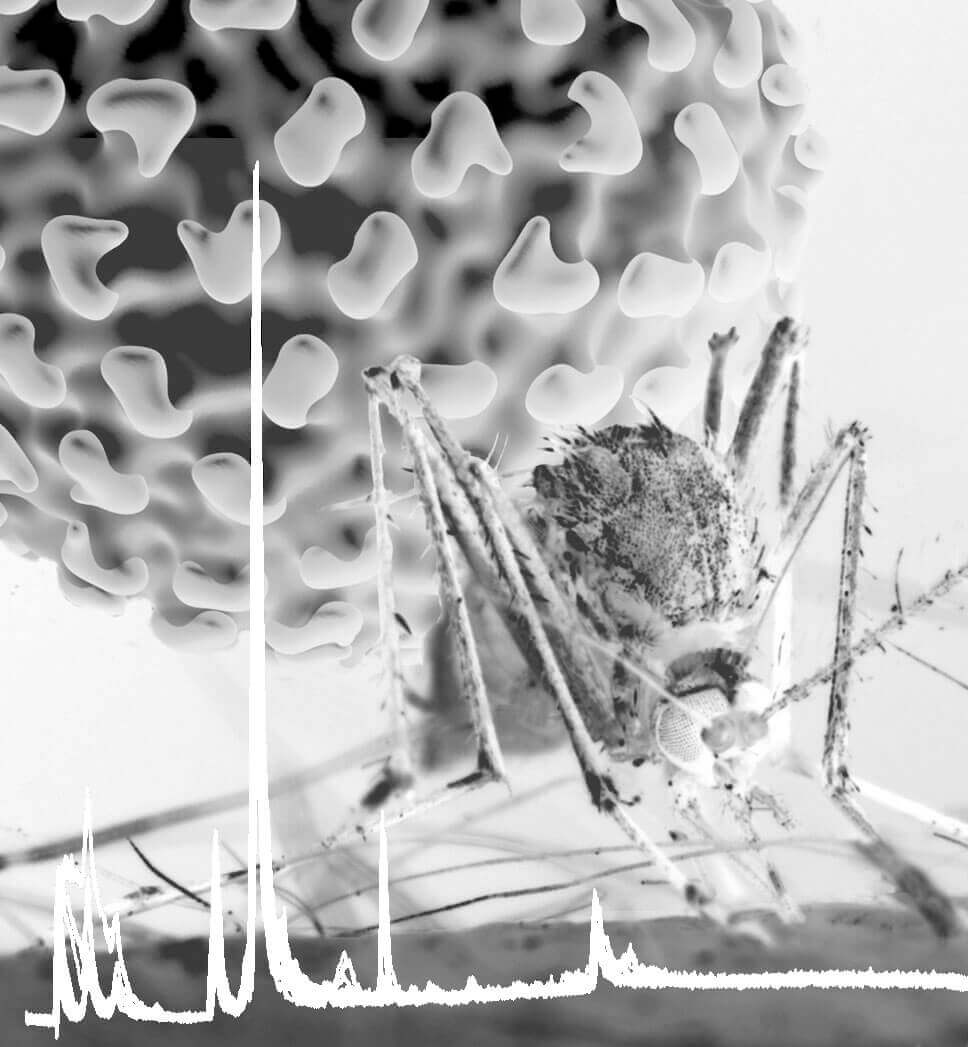 Dengue virus is transmitted primarily by the mosquito Aedes aegypti, shown here taking a blood meal. A Purdue University study identified changes in lipids in cells from the mosquito midgut, the primary site for virus amplification. A trace of the output from mass spectrometry is shown at the bottom as a spiky white line. (Purdue University photo/ Rodney McPhail) Download image

WEST LAFAYETTE, Ind. — The midgut of a mosquito may hold the key to preventing mosquito-borne diseases like Zika and Dengue, according to research published in PLOS Pathogens.

A mosquito’s ability to replicate and transmit a virus depends on the metabolic environment of tissues in its midgut: the primary site of infection. By targeting the sphingolipid pathway, which links together several pathways important for cell signaling and subcellular structure that are altered by virus infection, researchers could devise strategies that stall viral replication in the mosquito and prevent its transmission to humans.

“The strategies that are being pursued right now often involve sterilizing mosquitos or eradicating them, and those might work, but a subtler way would be simply changing the ability of the virus to exploit a pathway and let the mosquito continue on like nothing happened,” said Richard Kuhn, a researcher in Purdue University’s Institute of Inflammation, Immunology and Infectious Disease. “It’s fairly common these days to alter the expression of genes, so we might be able to create a different form of the enzyme that is not susceptible to virus manipulation.”

Arboviruses move between mosquitos (or ticks) and hosts. After an infected mosquito bites a host, the host comes down with the disease, and eventually another mosquito bites the host, picks up the disease in its blood meal and the cycle continues.

When a mosquito is infected, its metabolism changes to accommodate the virus. In the case of Aedes aegypti, the “yellow fever mosquito,” there are big fluctuations in molecules that function as membrane building blocks, energy storage molecules and intermediates in lipid production.

These changes could be a result of cellular resources being redistributed for viral replication, the cellular response to infection, or both. The consequences for mosquitos aren’t totally clear.

“There is a lot we don’t know about the ‘cost’ to the vector, but there is no argument there is one,” said Catherine Hill, also a researcher in Purdue’s Institute of Inflammation, Immunology and Infectious Disease. “The same phenomenon occurs when we get an infection. There are signatures that indicate it experiences stress, and host resources are ‘redistributed’ to processes that affect pathogen infection, replication and transmission, and presumably away from other life cycle processes.”

The study describes the first comprehensive analysis of the Aedes aegypti midgut. Usually, this type of experiment is done in cells, and researchers make assumptions about how the results would translate to a human or mosquito.

“Here, we’re looking directly at the mosquito,” Kuhn said. “I can’t tell you how much work it was to isolate a sufficient number of mosquito midgut cells that were infected with Dengue virus.”

Arboviruses are endemic in tropical and subtropical regions of the world, but rising temperatures are expanding the areas in which mosquitos can thrive. Cases of Dengue have increased 30-fold over the past 50 years, and climate is known to be one of the important drivers.

"Control of mosquitoes that transmit diseases to humans is at a crisis point,” said Hill. “We currently rely on only four classes of insecticides; resistance to these products is widespread among mosquito populations and we face a very real risk of losing control or being unable to contain disease outbreaks.”

Researchers from Colorado State University, led by Rushika Perera, collaborated with the Purdue team on this work. The Institute of Inflammation, Immunology and Infectious Disease is housed in Purdue’s Discovery Park.

This work was funded by the Boettcher Foundation - Webb Waring Biomedical Research Early Career Investigator award to Rushika Perera, by the Virus Pathogen Resource, (NIAID) award to Richard J. Kuhn, Catherine Hill and Rushika Perera, and by the Office of the Vice President for Research and the Department of Microbiology, Immunology and Pathology, Colorado State University.

We describe the first comprehensive analysis of the midgut metabolome of Aedes aegypti, the primary mosquito vector for arboviruses such as dengue, Zika, chikungunya and yellow fever viruses. Transmission of these viruses depends on their ability to infect, replicate and disseminate from several tissues in the mosquito vector. The metabolic environments within these tissues play crucial roles in these processes. Since these viruses are enveloped, viral replication, assembly and release occur on cellular membranes primed through the manipulation of host metabolism. Interference with this virus infection-induced metabolic environment is detrimental to viral replication in human and mosquito cell culture models. Here we present the first insight into the metabolic environment induced during arbovirus replication in Aedes aegypti. Using high-resolution mass spectrometry, we have analyzed the temporal metabolic perturbations that occur following dengue virus infection of the midgut tissue. This is the primary site of infection and replication, preceding systemic viral dissemination and transmission. We identified metabolites that exhibited a dynamic-profile across early-, mid- and late-infection time points. We observed a marked increase in the lipid content. An increase in glycerophospholipids, sphingolipids and fatty acyls was coincident with the kinetics of viral replication. Elevation of glycerolipid levels suggested a diversion of resources during infection from energy storage to synthetic pathways. Elevated levels of acyl-carnitines were observed, signaling disruptions in mitochondrial function and possible diversion of energy production. A central hub in the sphingolipid pathway that influenced dihydroceramide to ceramide ratios was identified as critical for the virus life cycle. This study also resulted in the first reconstruction of the sphingolipid pathway in Aedes aegypti. Given conservation in the replication mechanisms of several flaviviruses transmitted by this vector, our results highlight biochemical choke points that could be targeted to disrupt transmission of multiple pathogens by these mosquitoes.