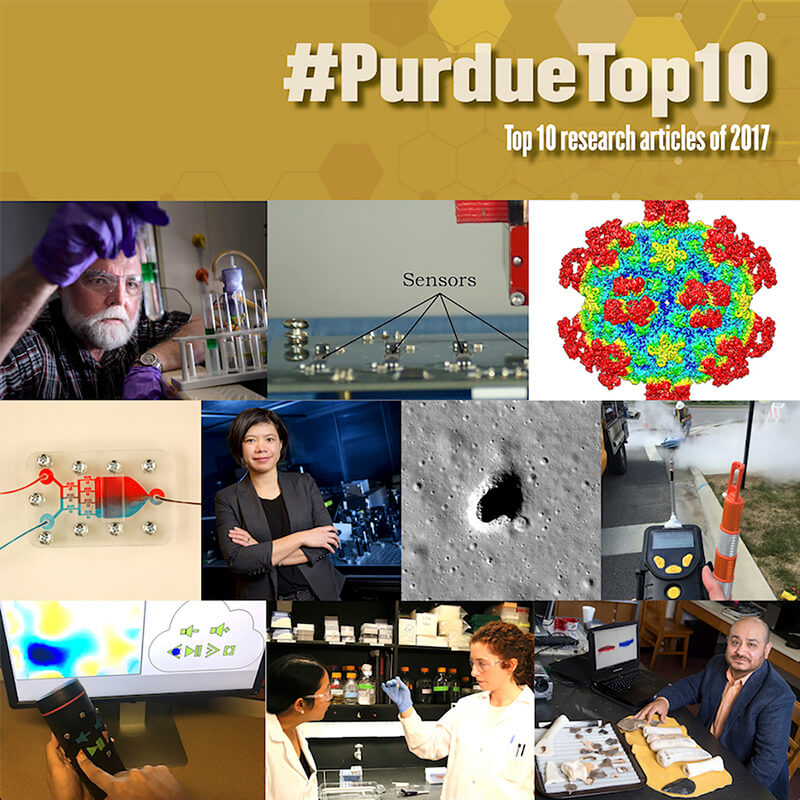 Purdue University has released a list of the top 10 research stories for 2017. The list includes a method to rapidly recharge lithium batteries, a possible shelter for explorers on the moon, and a material that doubles the efficiency of solar cells. (Purdue University image.) Download image

WEST LAFAYETTE, Ind. — A blood test for concussions, "refillable" lithium batteries, and a possible habitat for humans on the moon are among the research stories that editors and staff of the Purdue News Service have selected as being in their top 10 for 2017.

9. "Non-toxic underwater adhesive could bring new surgical glue." A non-toxic glue modeled after adhesive proteins produced by mussels and other creatures has been found to out-perform commercially surgical sutures and staples—and could be used in an estimated 14 million procedures worldwide each year. The surgical glue lowers risk of infection, does less damage to surrounding tissue, and improves patient comfort, said Julie Liu, an associate professor of chemical engineering and biomedical engineering. (See also"Engineers in the US have turned to nature to develop an adhesive that is biocompatible and can be tuned for specific applications," The Engineer. A YouTube video is also available.)

8. "Innovative material for soft sensor could bring new tactile tech." A new type of material can serve as an electronic sensor or controller. Unlike other "smart" materials, iSoft contains no wiring or electronics, within the material, allowing it to stretch. "Even if you have no professional knowledge of electronics you can modify any object with it, including objects with complex shapes,” said Karthik Ramani, Purdue's Donald W. Feddersen Professor of Mechanical Engineering and director of the C Design Lab. (See also "Tactile soft sensor can turn anything into a controller," Engadget. A YouTube video is also available.)

7. "Materials emitted by a water pipe-repair method may pose health risks, new safeguards and research needed." A widely used construction method for repairing sewer-, storm-water and drinking-water pipes previously thought to be safe was shown to be a potential health and environmental issue for workers and the public. The procedure, called cured-in-place pipe repair, or CIPP, involves inserting a resin-impregnated fabric tube into a damaged pipe and curing it in place with hot water or pressurized steam, sometimes with ultraviolet light. A Purdue team led by Andrew Whelton, an assistant professor in Purdue’s Lyles School of Civil Engineering, found that the chemical plume, commonly thought of as harmless steam, actually contains particulates partially cured resin, organic chemicals, and other materials. (See also "City will examine common pipe proceure that sickened 36 students," KGTV San Diego. A YouTube video is also available.)

6. "Potential human habitat located on the moon." Radar data confirmed a previously theorized enormous cavern called a lava tube in the Marius Hills region of the moon. Space suits alone can’t shield astronauts from its elements: extreme temperature variation, radiation, and meteorite impacts; unlike Earth, the moon has no atmosphere or magnetic field to protects its inhabitants. This finding could enable astronauts to make longer expeditions to the moon or even provide shelter for a moon colony. According to Jay Melosh, Distinguished Professor of Earth, Atmospheric and Planetary Sciences at Purdue, the lava tube near the Marius Hills is spacious enough to house one of the United States’ largest cities. (See also "This gigantic lava tube could be home for moon colonists," NBC News.)

5. "Crystalline material could replace silicon to double efficiency of solar cells." A new material has been shown to have the capability to double the efficiency of solar cells by researchers at Purdue and the National Renewable Energy Laboratory. Conventional solar cells are at most one-third efficient, but this new material boosts the efficiency so that it can carry two-thirds of the energy from light without losing as much energy to heat. In less technical terms, said Libai Huang, an assistant professor of chemistry, this material could double the amount of electricity produced without a significant cost increase. (See also "The sun is still rising—chasing 'hot electrons' and a 35% solar price reduction," Electrek.)

4. "Purdue researchers create device to identify risks for breast cancer." An electronic device that replaces cell cultures to better mimic human organs and could soon identify risk factors such as carcinogens that cause breast cancer has been developed by researchers at Purdue. The device, known as risk-on-a-chip, is a small plastic case with several thin layers and an opening for a piece of paper where researchers can place a portion of tissue. This tiny environment produces risk factors for cancer and mimics what happens in a living organism. “We want to be able to understand how cancer starts so that we can prevent it,” said Sophie Lelièvre, a professor of cancer pharmacology.
(See also "Purdue develops new tool for cancer risk prevention," WFYI Indianapolis.)

2. "Vibrating sensors could identify blood biomarkers, improve early-stage detection, treatment of numerous diseases." A research team has developed tiny, electronic vibrating sensors that can detect biomarkers caused by diseases or injuries using just a drop or two of blood. The plate-style resonant sensors allows sensitive, inexpensive detection of biomarkers that can signify disease, illness or trauma. Jeffrey Rhoads, a professor in the School of Mechanical Engineering; George Chiu, a professor in the School of Mechanical Engineering, School of Electrical and Computer Engineering, and Department of Psychological Sciences; and Eric Nauman, a professor in the School of Mechanical Engineering, Department of Basic Medical Sciences and the Weldon School of Biomedical Engineering, were part of that team. Nauman said the sensors could be used to develop an inexpensive blood test for concussions. “Essentially the idea is that if you can measure anything that passes through the blood-brain barrier from the brain into the blood, it's a problem because it should stay in the brain." (See also "Purdue researchers develop early detection for concussions, dementia," Lafayette Journal & Courier.)

1.  "'Instantly rechargeable' battery could change the future of electric and hybrid automobiles." A technology developed by Purdue researchers could provide an “instantly rechargeable” method that is safe, affordable and environmentally friendly for recharging electric and hybrid vehicle batteries through a quick and easy process similar to refueling a car at a gas station. The innovation could expedite the adoption of electric and hybrid vehicles by eliminating the time needed to stop and re-charge a conventional electric car’s battery and dramatically reducing the need for new infrastructure to support re-charging stations. Inventors John Cushman, Purdue distinguished professor of earth, atmospheric and planetary science and a professor of mathematics; Eric Nauman, professor of mechanical engineering, basic medical sciences and biomedical engineering; and Mike Mueterthies, doctoral teaching and research assistant in physics, have created a corporation, Ifbattery LLC (IF-battery), to commercialize the technology. (See also, "Pour to recharge your electric vehicle," Smithsonian. A YouTube video is also available.)