WEST LAFAYETTE, Ind. — Purdue University researchers Michael Rossmann and Richard Kuhn have been at the forefront of discovery with the help of a technology that recently led to a Nobel Prize in chemistry for three scientists.

It’s called cryo-electron microscopy, a technology that allows scientists to see complex biological specimens, including viruses, at almost atomic-scale resolution. Rossmann, Kuhn and their Purdue research team earned international headlines in March 2016 when they determined the structure of the Zika virus, which was made possible using cryo-electron microscopy. It was a key breakthrough at a time when scientists around the world were frantically trying to control this quickly spreading virus which is transmitted by mosquito bites.

“Purdue and these two researchers, in particular, can take great pride that we are on the cutting edge of research and discovery,” said Suresh Garimella, Purdue’s executive vice president for research and partnerships. “The most recent Nobel Prize winners played a seminal role in advancing a technology that enables those like Michael Rossmann and Richard Kuhn to expand our understanding and make a critical difference in the lives and health of people around the world.”

In their research, the Rossmann-Kuhn team also identified regions within the Zika virus structure where it differs from other flaviviruses, such as dengue, West Nile, yellow fever, Japanese encephalitis and tick-borne encephalitic viruses. Most recently, the research team determined the way some antibodies neutralize infections caused by Zika virus.

“We have been working with cryo-electron microscopy for a very long time in my laboratory. We try to determine how viruses enter and infect their hosts,” said Rossmann, Purdue’s Hanley Distinguished Professor of Biological Sciences. “Cryo-electron microscopy allows us to see viruses throughout the life cycle. We can follow the chemistry of these events at near-atomic resolution, where bonds between atoms are made and broken.” 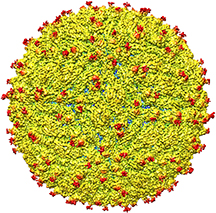 Cryo-EM reconstruction showing the surface of the Zika virus is shown. A team led by Purdue University researchers is the first to determine the structure of the Zika virus, which provided insights that are critical to the development of effective antiviral treatments and of vaccines. (Purdue University image/courtesy of Kuhn and Rossmann research groups)  Download image

Here is what Rossmann and Kuhn said in March 2016 regarding the Zika virus structure breakthrough:

“Since the 1950s X-ray crystallography has been the standard method for determining the structure of viruses, but it requires a relatively large amount of virus, which isn’t always available; it can be very difficult to do, especially for viruses like Zika that have a lipid membrane and don’t organize accurately into a crystal; and it takes a long time,” Rossmann said. “Now, we can do it through electron microscopy and view the virus in a more native state. This was unthinkable only a few years ago.”

Kuhn said, “The structure of the virus provides a map that shows potential regions of the virus that could be targeted by a therapeutic treatment, used to create an effective vaccine or to improve our ability to diagnose and distinguish Zika infection from that of other related viruses.”

The 2017 Nobel Prize in Chemistry was awarded Wednesday (Oct. 4) to biophysicists Jacques Dubochet, Joachim Frank and Richard Henderson. Dubochet is a professor at the University of Lausanne in Switzerland; Frank is a Columbia University professor and Henderson is at Cambridge University in the United Kingdom.