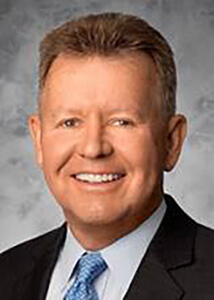 WEST LAFAYETTE, Ind. — Thank you, President Daniels, for your kind words. I am honored to be here today. The first thing I want to say to you, our soon-to-be-graduates, is “Congratulations!”

Obtaining a degree from one of the top 100 universities in the world is a great achievement. I know it took years of commitment and hard work for you to get here today.

I would like to spend a minute talking about this degree you are about to receive. The value of a college degree has come under some question in recent years. The burden of student debt and the inability of some to obtain high-paying jobs has led many to say a college degree is simply not worth it.

Well, my view is different. The world is changing at an ever-increasing rate. Those that are not able to change with it will be left behind. I have seen unbelievable changes from the time I graduated from Purdue with a slide rule in my hand, pay phones on the street corners and punch cards to run Fortran programs over at the Math-Sciences Building. Back then, I could never imagine your campus experience with laptop computers, mobile phones and the internet. The changes that occurred over the past 40 years will be nothing compared with what you are likely to experience in the next 10. Artificial intelligence, self-driving electric cars and robots in your home and office are all likely to become reality soon. The ability to adapt to this exponential pace of technological change will be essential to your success in business, as well as in life.

I am certain your time here at Purdue provided you with an in-depth knowledge in your field of study. It also exposed you to people from different places, with different backgrounds and different ways of thinking. Most importantly, it taught you how to learn, how to communicate, and how to work with others to tackle difficult challenges. These skills will be essential in your future world and will make the Purdue degree you are about to receive invaluable.

So let’s take a minute to celebrate your achievement. I invite you to look around this auditorium to see your fellow graduates, family and friends and enjoy this moment. Give those around you a high-five.  Congratulate one another.

OK, enough celebrating for a moment.

I certainly did not come here today to give you a lecture. Instead, I thought I would simply share a couple stories from my life in hope that some of the lessons I have learned will come in handy for you in your careers down the road.

When I graduated from Purdue, everyone asked me what I planned to do with my new civil engineering degree. I had friends with big, audacious goals like running their own company, holding high government positions or earning a Nobel Prize for their research. Many of you may have similar goals. Others of you, like me when I was in your seat, may just be happy to have found a job.

As I started my first job working for a major international construction company in California, I found myself surrounded by a group of smart, talented new college grads from top universities across the country. I was completely intimidated and had no idea how I was going to succeed among this talented group. So, instead of thinking about how I was going to compete and advance, I simply focused on each assignment, to learn as much as I could from that assignment and how what I was working on fit into the larger business objectives of our company. The focus on personal learning and the understanding of the larger business objectives served me well later in my career.

To that end, as a longtime hiring manager, I hope you will exercise caution when answering your employer’s questions about your career aspirations. I have heard far too any applicants tell me their goal is to get into management or to hold some high-level position. My advice is: Do not worry so much about titles. Instead, focus of what you will be able to contribute to the company and what you hope to learn from the company in your new role. Trust that you have the skills to make your team and company successful. The recognition and titles you are due will come in time.

That is not to say that the world of business will not be frustrating. There is rarely a straightforward path to your ultimate goal. Most careers more closely resemble a country road full of twists and turns and occasional dead ends. Patience, persistence and flexibility will be required.

In the world of construction, becoming a project manager is an important step toward moving into senior management. When I finally got an opportunity to lead a large subsea pipeline project to transport natural gas from the Gulf of Thailand to major power plants near Bangkok, I was initially thrilled. Gradually, reality started to settle in. I had never been a project manager. Never been to Thailand or anywhere else in Asia. The only pipeline I had ever built was a small storm sewer around a football field as a summer intern. Being a project manager is only good for your career if you are successful. This opportunity began to look like a long putt.

I took the assignment anyway. I was fortunate to have had a great team of experts working with me. We bought pipe in Japan and coatings in Malaysia, and hired Italians to construct the line in Thailand. Working with people of vastly different cultures from around the world was a great experience and, in the end, we completed the project on time and under budget.

So, success was mine, right? Sort of. My team and I went on to win and execute several other pipeline projects in Thailand and the surrounding countries. We developed a steady business over a seven-year period. Although I felt pretty successful and was constantly learning new things about running a business overseas, I felt that other colleagues working in the home office were moving ahead of me in the organization. I remember my wife asking, “Do you think they even remember we are out here?” Patience and perseverance eventually paid off. I received a great opportunity for a new assignment – a relocation to London to lead a major business unit overseeing Europe, Africa and the Middle East.

Clearly, this was a great career opportunity, but the timing was not good. My youngest daughter had just started her junior year of high school in Bangkok and I had promised her we would not move again until she finished high school. My wife and I were hoping for a U.S. assignment next, especially after being out of the country for so long. Then there were the cats. London meant an additional six months of quarantine, and my wife was not moving to London if it meant putting them through that.

So here was my big opportunity - to run our oil and gas business for a large portion of the world - which I had been working toward all those years. The timing just seemed all wrong.

Fortunately, we accepted the assignment and worked through our issues. My daughter moved in with a friend and finished the school year in Thailand. My wife packed up and moved to London. And the cats? Well … somehow, they got to London without the additional quarantine. Creative problem solving is an essential skill.

Accepting that assignment led to running our oil and gas business worldwide and eventually to becoming the CEO of the largest engineering and construction company in the U.S., and one of the 10 largest in the world, a position I could never have imagined holding when I left Purdue.

As for what appeared to be sacrifices in taking so many international assignments, I believe my family would all now agree these were some of the best times of our lives. My daughters still have good friends around the globe. And personally, the experience I gained from working overseas for over a decade provided me with the background required to deal with heads of state and CEOs of the largest companies in the world in building some of the most challenging projects on the planet.

I tell you this story because I have seen so many colleagues work for years to attain the position of their dreams, only to turn it down when the opportunity presents itself.

So, what is the message to you from all of that? When opportunities arise for you, don’t be afraid. Lin Manuel-Miranda wrote the song “My Shot” for the musical “Hamilton” now appearing on Broadway, in which the ambitious Alexander Hamilton describes himself as “A shiny piece of coal trying to reach my goal.” Repeatedly, Hamilton sings about taking the opportunity “to take my shot.” As with Hamilton, may each of you soon-to-be graduates jump at the opportunity to “take your shot” when it arises. The best opportunities in life rarely come without challenges … and less frequently, come twice. Find solutions to the many obstacles, make a few sacrifices and pursue your goals and dreams. You won’t regret it.

I wish each of you the very best of luck as you go forward from this great university and strive to make this world a better place.

Thank you. Boiler Up!