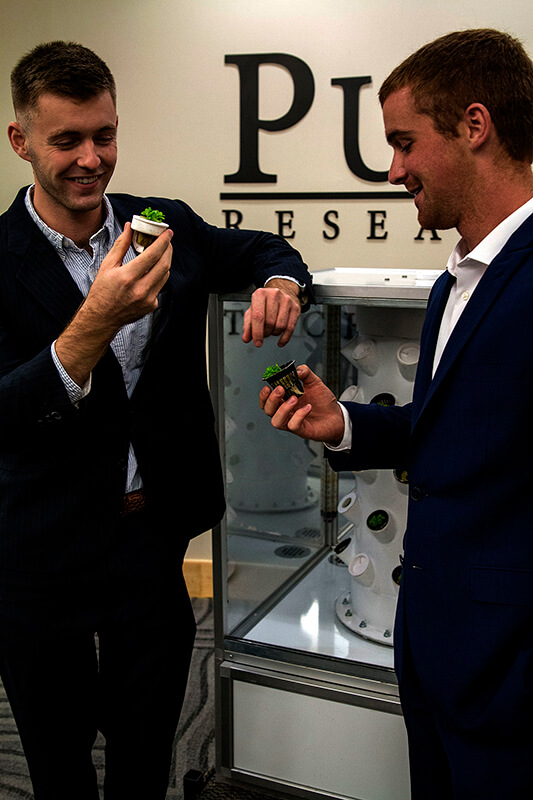 WEST LAFAYETTE, Ind. – Purdue University students who developed an automated device to grow vegetables in consumer’s home have started a company to commercialize their technology and develop an improved third model.

Scott Massey and Ivan Ball, recent graduates of Purdue’s Polytechnic Institute, originally inspired by NASA-funded research into self-sufficient plant life systems, co-founded the company Hydro Grow LLC to commercialize their appliance. Others on the Hydro Grow team are James Carlson, a junior in the Department of Computer Science; and John Kissel, a past student of the Krannert School of Management.

Hydro Grow’s technology offers the Gropod, a self-sustainable refrigerator-sized unit capable of growing fresh produce in a consumer’s home. The system uses advanced machine learning algorithms, which allows the device to be aware of what plants are growing in it and adapt its environmental conditions to the specific preferences of that plant. After several prototypes, the company is developing an Alpha 3 model with improved functionality and a corresponding app.

Massey said the company’s mission is to eliminate consumer’s dependence on grocery stores.

“By 2050 the population is expected to grow to nearly 9 billion people, doubling the world’s food demand and water consumption,” he said. “Additionally, food deserts affect 23.5 million people in the United States. Half of these people are also low-income so if poorer communities do not have access to fresh produce, they are more likely to have health complications and additional expenses.”

Hydro Grow offers two services — a hydroponic appliance capable of growing produce, and seed pods from which the produce grows.

The Alpha 3 model is controlled by a user with the Hydro Grow app. The company will make the new model available to 10 to 30 early adopters.

“Users will be able to order the seed pods of their choice via our phone app, plug the seed pod into their system, update the phone application, and let the produce grow until it’s ready to harvest,” Ball said. “Users can remotely monitor the production of produce within each unit. The system will also have a clean cycle every few months that is activated via the phone application.”

Kissel said the company’s priority is to make the appliance as affordable as possible.

“Our most important goal is reducing the cost of the unit to make it a more sensible investment for most consumers,” he said. “Our system not only fills a need but can also help people who may have small gardens, by providing an alternative that produces 95 percent less waste and grows two to three times faster. Our feedback has been that people are ready for this product.”

A short video about Hydro Grow can be viewed at https://youtu.be/KE-nEQXHn0E.

Hydro Grow hopes to advance its technology as the company moves into its next stages of commercialization.

“We are progressing toward a robust system that can achieve optimal growth rates with the least amount of components and user maintenance,” Carlson said. “We hope to identify plastic or electrical manufacturing partners, with competitive pricing. We’re also working on a software development campaign to facilitate seedling orders on a ‘smart’ platform.”

Hydro Grow has raised over $80,000 through competitions to advance its technology. Hydro Grow hopes to collaborate with hydroponic nurseries in major cities to create and distribute seedpods. The company is also seeking investment funding.

“We’re actively looking for funding to achieve a full-scale commercial launch with our original equipment manufacturer. We hope to accomplish this launch by 2018,” Massey said. “We also are interested in taking on interns as the Hydro Grow’s business rapidly expands.”