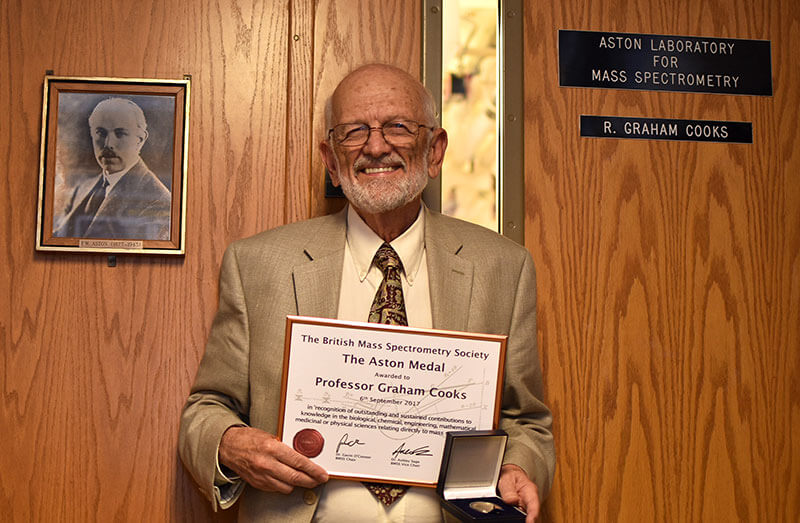 Graham Cooks with his Aston Medal in front of the Aston Lab. Download image

WEST LAFAYETTE, Ind. — Graham Cooks, a professor of analytical chemistry at Purdue University, has been awarded the Aston Medal from the British Mass Spectrometry Society.

The Aston Medal is given to scientists who have made outstanding contributions to knowledge in various fields relating to mass spectrometry. The award was presented by the society’s chair, Gavin O’Connor, who highlighted the influence of Cooks’ work in the early 2000s on his own Ph.D. project.

Academic and industrial scientists of any nationality who have worked in the United Kingdom are eligible to receive the award. Cooks received his Ph.D. from the University of Cambridge, where he also served as a post-doctoral fellow.

By a strangely appropriate coincidence, the mass spectrometry laboratory in chemistry at Purdue has been known as the “Aston Lab” since 1976.

“The award of the Aston Medal to the Aston Lab is something like isotopic justice,” Cooks said. “Isotopes are versions of elements with the same chemistry. The individual Astonites all share the same human ‘chemistry,’ so the award is to all of us, present and past. I simply served as representative isotope of the research group.”

Cooks is the 13th recipient of the Aston Medal. The first to ever receive the award, John Beynon, was a chemistry professor at Purdue from 1969-75 and worked closely with Cooks during that period.

Cooks is a pioneer in the field of mass spectrometry, which identifies the contents of a sample by measuring the masses of its ions, or electrically charged molecules.

Early in his career, he helped revolutionize the field through the development of tandem mass spectrometry, which allowed for the quantification of the molecules present as well as their identification. He later developed ambient ionization techniques that paved the way for faster, more portable mass spectrometry devices. The techniques eliminated the need for samples to be chemically manipulated and contained in a vacuum chamber during analysis and allowed testing to be done in the air or directly on a surface in its natural environment.

Recently, his lab has been working on a collaborative study with neurosurgeons at Indiana University to improve the diagnostic information during brain surgery.

Cooks was awarded the 2013 Dreyfus Prize in Chemical Sciences in recognition of his innovations in mass spectrometry and analytical chemistry. He was elected into the National Academy of Sciences, one of the highest honors given to a scientist in the United States, in 2015.