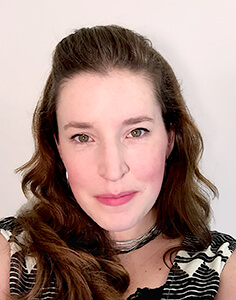 WEST LAFAYETTE, Ind. - Purdue University earth, atmospheric and planetary sciences professor Briony Horgan will highlight efforts by Purdue and NASA in the search for signs of microbial life on Mars at next week's Science on Tap.

Horgan will give a talk titled, "Roving Mars: NASA's Search for Life on Ancient Mars," at 6 p.m. April 27 on the top floor of Lafayette Brewing Company, 622 Main St., Lafayette. The informal lecture, sponsored by the Department of Earth, Atmospheric, and Planetary Sciences, and the College of Science, is free and open to those 21 and older.

The surface of Mars is the frontline in NASA's search for life beyond Earth, and NASA has devoted three generations of robotic, semi-autonomous rovers to this search, Horgan said. Through the efforts of the scientists and engineers behind the Spirit, Opportunity and Curiosity rovers, researchers now know that Mars hosted water environments that may have been habitats for ancient life 4 billion years ago.

"Planetary scientists at Purdue are working with NASA to design instruments and choose the landing site for the Mars 2020 rover, which will search for signs of ancient microbial life on Mars and collect samples to return to Earth," Horgan said. "Why is this search important, and how much can these robotic geologists do alone? That will be the focus of my Science on Tap talk."

During a three-day workshop in California in February, NASA narrowed the list of sites of where the spacecraft will go to three, and a final selection is expected a year or two before the launch of the Mars 2020 rover.

The three landing sites include the Jezero crater, which was once home to an ancient Martian lake. Other possible targets are Northeast Syrtis, where hot waters once circulated through the crust, and Columbia Hills, the area explored for years by NASA's Spirit rover.

In her research, Horgan uses data from NASA's satellites and rovers to understand the geologic history of the Moon and Mars, supported by lab and field work at analog sites on Earth. Her expertise is identifying minerals using visible and infrared spectroscopy. Horgan uses those minerals to investigate planetary surface processes and to identify habitable ancient environments on Mars.

Appointed an assistant professor at Purdue in 2014, Horgan received her bachelor's degree in physics from Oregon State University before gaining her doctorate degree in astronomy and space sciences from Cornell University. She also served as a faculty research associate and an exploration postdoctoral fellow at Arizona State University.

Science on Tap, now led by graduate students Andrew Hesselbrock, Paula Cooper, Elizabeth Phillips and Carolina Vivas Valencia, provides Purdue faculty and collaborating researchers the opportunity to share research activities in an informal setting with presentations designed to appeal to a more general audience. Attendance at the event has averaged 80 during the program's first five years.