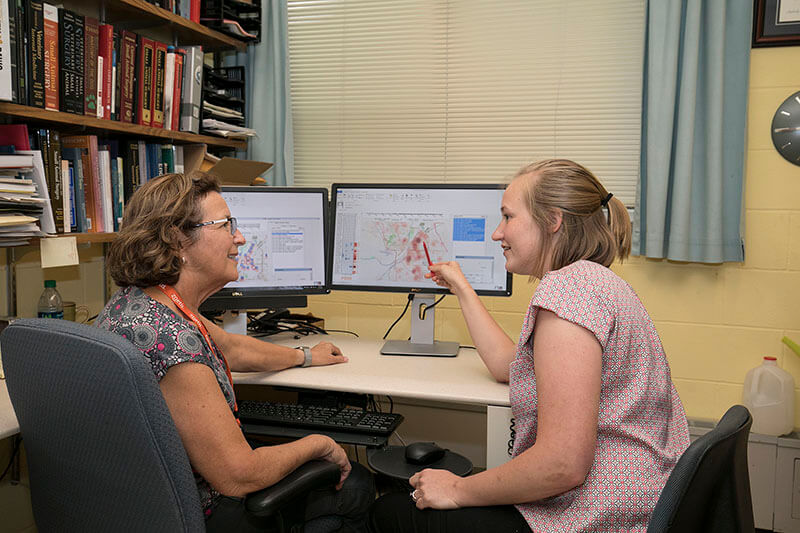 WEST LAFAYETTE, Ind. – A Purdue software toolkit, originally developed to help law enforcement officers reduce crime and assist in using big data for decision-making, will play a vital role in a project led by researchers in Purdue’s College of Veterinary Medicine. The project aims to find supporting data on a link between animal abuse and child abuse in Greater Lafayette.

Freeman and Stuckwisch are enlisting the help of the Visual Analytics Law Enforcement Toolkit, or VALET, developed in the Visual Analytics for Command, Control and Interoperability Environments, or VACCINE, center at Purdue. Nicole Kong, an assistant professor in Purdue Libraries, also will assist with the project by providing her expertise on geographic information systems.

With Freeman as her mentor, Stuckwisch is conducting the research as part of the college’s 2017 Veterinary Scholars Summer Research Program, which provides fellowships to veterinary students interested in exploring careers in research.  Stuckwisch said the goal of this project is to raise awareness of the link between abuse of animals and children in Tippecanoe County.

“Through this project we aim to provide evidence to encourage Indiana politicians to push for adoption of mandatory reporting of animal abuse by veterinarians and cross-reporting between child and animal protection agencies for neglect and abuse cases,” she said. “Indiana does have laws regarding animal abuse reporting, but it is not mandatory. We are working with the Indiana Board of Animal Health to help at the legislative level and hopefully enact this needed change.”

The National Link Coalition, part of the National Resource Center on The Link between Animal Abuse and Human Violence, already has identified links between animal abuse or neglect and other forms of family violence and some states have taken action. California (SB 1264) and Virginia (HB 74 and SB 239) recently enacted laws that require reporting by animal control officers and veterinarians who suspect child abuse. New York and New Mexico are considering such laws.

Research from the American Psychological Association reports that 71 percent of battered women report that their abusers had injured, killed or threatened their pet, and in child abuse cases, 85 percent of the abusers also were abusing family pets.

“A colleague from the University of Florida engaged in an extensive project that found the link between animal abuse and domestic violence, along with several other links,” Freeman said. “Veterinarians recognize this link between child and animal abuse, but we’re interested in finding the local implications of it.”

The VALET system will help Freeman and Stuckwisch by providing access, analysis and visualization of data related to reporting and dispatching of officers on incidents related to child and animal abuse.

Developed at VACCINE, a Purdue led U.S. Department of Homeland Security Center of Excellence, the VALET software provides real-time data so officers can analyze high-volume criminal, traffic, and civil incident data as well as related emergency management and disaster preparedness events. In doing so, officers can be more strategic in how they allocate their limited resources within their communities.

"Predictive and proactive analytics that create a picture of what is happening at any given time and what could happen in an hour or a day or a week is a tremendous help for law enforcement and disaster relief officials," said David Ebert, director of VACCINE. “For this project specifically, VALET can ingest things like census socioeconomic data or animal shelter data, to make the analysis in the project more comprehensive and significant.”

Chittayong “Jao” Surakitbanharn, research analyst at VACCINE, said the data and maps the system can provide could be of great help for this project.

“VALET will allow Stuckwisch to search specifically for animal abuse and child abuse cases in the area and see if there appears to be a connection between the two,” he said. “From 2013 to now there have been 48 reported cases in Greater Lafayette. This low number could be due to the fact it is not mandatory to report animal abuse in Indiana. Our system can provide a spatial overlay of maps in the areas of domestic violence and animal abuse. We’re also able to show hot spots where abuse is reported as well as details such as the time of day abuse is occurring, how often and what other crimes have been reported.”

Kong said census data also could help tremendously in this project, by giving insight into socioeconomic factors and demographics of those at risk of perpetrating and being victims of abuse.

“Many different data sources could really help find associations between certain elements with our areas of interest,” Kong said. “We plan to utilize things such as census information to find other links such as looking at animal abuse and expenditures for pet care.”

VALET is patented through the Purdue Research Foundation Office of Technology Commercialization.

Stuckwisch will be presenting her findings at the research poster session that concludes the Purdue Veterinary Scholars Summer Research Program in July as well as at a meeting of the legislative committee of the Indiana Veterinary Medical Association in September.

“Having access to VALET is going to be incredibly helpful to us in having data to support our claims,” Stuckwisch said. “In addition to the maps, we plan on taking a deeper dive in looking at public records, talking to local officers and working with the police and humane society to acquire more data.”

The Purdue University College of Veterinary Medicine seeks to advance global animal and human health and well-being through excellence in learning, discovery and engagement while serving as a major referral center for the diagnosis and treatment of animal diseases.  Faculty research both animal and human health, with an emphasis on animal welfare science and the human-animal bond; infectious diseases and immunology; cancer; neuroscience; and musculoskeletal biology and orthopedics.  The college also is one of only a few nationally that educate all members of the veterinary team, offering  the doctor of veterinary medicine degree as well as bachelor's and associates degrees in veterinary technology, post-graduate internships and residencies for veterinarians seeking specialty training, and graduate degrees in the departments of Basic Medical Sciences, Comparative Pathobiology, and Veterinary Clinical Sciences. For more information visit www.vet.purdue.edu.