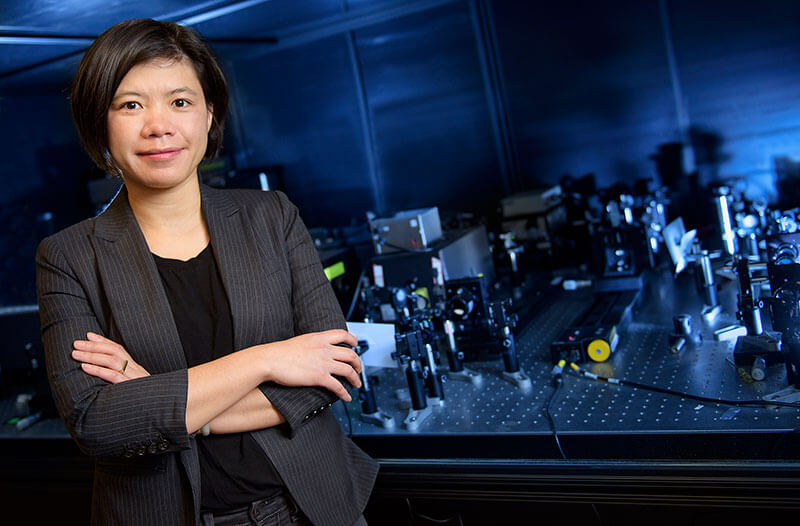 Libai Huang, an assistant professor of chemistry at Purdue University, has led a team which has imaged fast moving electrons in a new material that could double the efficiency of solar cells. The material is flexible, cheap, and easy enough to create that Huang says her students can do it. (Purdue University image by Rebecca Wilcox) Download image

WEST LAFAYETTE, Ind. —A new material has been shown to have the capability to double the efficiency of solar cells by researchers at Purdue University and the National Renewable Energy Laboratory.

Conventional solar cells are at most one-third efficient, a limit known to scientists as the Shockley-Queisser Limit. The new material, a crystalline structure that contains both inorganic materials (iodine and lead) and an organic material (methyl-ammonium), boosts the efficiency so that it can carry two-thirds of the energy from light without losing as much energy to heat.

In less technical terms, this material could double the amount of electricity produced without a significant cost increase.

Enough solar energy reaches the earth to supply all of the planet's energy needs multiple times over, but capturing that energy has been difficult – as of 2013, only about 1 percent of the world's grid electricity was produced from solar panels.

"My graduate students learn how to make it in a few days," she says.

The breakthrough is published this week in the journal Science.

The most common solar cells use silicon as a semiconductor, which can transmit only one-third of the energy because of the band gap, which is the amount of energy needed to boost an electron from a bound state to a conducting state, in which the electrons are able to move, creating electricity.

Scientists at Purdue University and the National Renewable Energy Laboratory have discovered how electrons move in a new crystalline material and this discovery could lead to doubling the efficiency of solar cells. Ultrafast microscope images, such as these, show that the electrons in material is able to move over 200 nanometers with minimal energy loss to heat. (Purdue University image by Libai Huang) Download image

Incoming photons can have more energy than the band gap, and for a very short time – so short it's difficult to imagine – the electrons exist with extra energy. These electrons are called "hot carriers," and in silicon they exist for only one picosecond (which is 10-12 seconds) and only travel a maximum distance of 10 nanometers. At this point the hot carrier electrons give up their energy as heat. This is one of the main reasons for the inefficiency of solar cells.

Huang and her colleagues have developed a new technique that can track the range of the motion and the speed of the hot carriers by using fast lasers and microscopes.

"The distance hot carriers need to migrate is at least the thickness of a solar cell, or about 200 nanometers, which this new perovskite material can achieve," Huang says. "Also these carriers can live for about 100 picoseconds, two orders of magnitude longer than silicon."

Kai Zhu, senior scientist at the National Renewable Energy Laboratory in Golden, Colorado, and one of the journal paper’s co-authors, says that these are critical factors for creating a commercial hot-carrier solar cell. 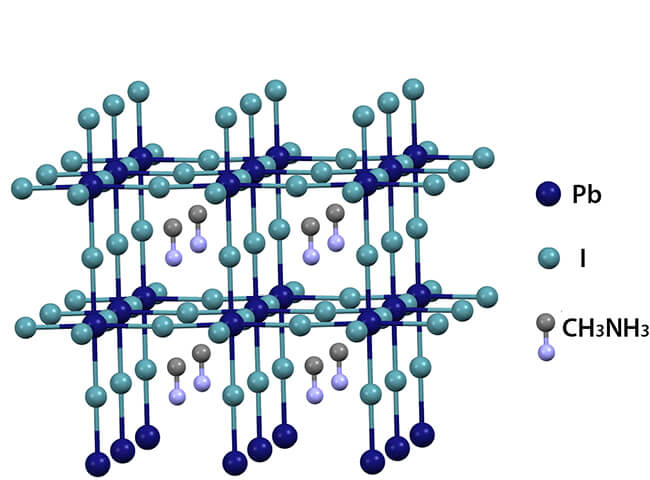 The potential to double the efficiency of solar cells using a new unique material has been discovered by Purdue University and the National Renewable Energy Laboratory. The material, called a hybrid perovskite, has an inorganic crystal "cage" which contains an organic molecule, methyl-ammonium. (Purdue University image by Libai Huang) Download image

However, before a commercial product is developed, researchers are trying to use the same techniques developed at Purdue by replacing lead in the material with other, less toxic, metals.

"The next step is to find or develop suitable contact materials or structures with proper energy levels to extract these hot carriers to generate power in the external circuit," Zhu says. "This may not be easy."

The Shockley-Queisser limit for solar cell efficiency can be overcome if hot carriers can be harvested before they thermalize. Recently, carrier cooling time up to 100 picoseconds was observed in hybrid perovskites, but it is unclear whether these long-lived hot carriers can migrate long distance for efficient collection. We report direct visualization of hot-carrier migration in methylammonium lead iodide (CH3NH3PbI3) thin films by ultrafast transient absorption microscopy, demonstrating three distinct transport regimes. Quasiballistic transport was observed to correlate with excess kinetic energy, resulting in up to 230 nanometers transport distance that could overcome grain boundaries. The nonequilibrium transport persisted over tens of picoseconds and ~600 nanometers before reaching the diffusive transport limit. These results suggest potential applications of hot-carrier devices based on hybrid perovskites.