Student startup plans to offer app that can detect concussions 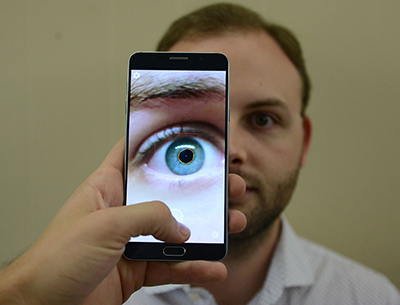 Brightlamp LLC co-founder Kurtis Sluss shows how the company’s prototype app, called Collide, maps the pupil of the eye. Collide is being planned as the first app that can detect concussions that will be available to the public. (Photo provided by Brightlamp LLC) Download image

WEST LAFAYETTE, Ind.  – Brightlamp LLC, a Purdue student-based startup, is working to become the first company to offer a downloadable app for public use that can detect concussions in real time.

Brightlamp is working on an app they’ve named Collide, which flashes a light from a smart device into a subject’s eye and then measures the pupil’s dilation and constriction, which helps detect concussion. The app determines the eye’s pixels per-second rate through the use of the device’s camera in about five seconds. Collide could provide an answer to the possibility of a concussion in under 30 seconds.

The technology has been around for several years, available to NFL medical personnel and other professionals on a contractual basis, said Kurtis Sluss, company co-founder and chief executive officer. But they use different techniques to administer the technology, which has never been put onto a smart device.

“We want to open it to the public,” he said.

The company has a provisional patent for the use of the technology on a mobile device. They are also in the process of submitting a utility patent.

“We just got word back that the utility patent is going to be expedited for us,” he said. “Hopefully we’ll hear back from the patent office close to May 2017.”

Collide currently has a beta application, said Jonathan Holt, company co-founder and chief legal officer. Company officials plan to conduct tests with some Lafayette area high school football teams in 2017. They’re hoping to release the app to the public by the end of 2017.

In early testing of Collide data against MRIs, Collide has shown the potential to be more than 98 percent accurate, Holt said.

“We’re making every effort to validate this technology,” he said.

Sluss graduated from Purdue in May with dual bachelors’ degrees, one in chemical engineering and one in chemistry.

Holt is scheduled to graduate in May 2017 with a bachelor’s degree in electrical engineering technology.

The longtime friends came up with the idea as they planned to participate together in Greater Lafayette (Indiana) Startup Weekend 2015 hosted by MatchBOX Coworking Studio in Lafayette. The annual event brings together entrepreneurs to work on new startups.

“I realized that in recent years there’s been a looming problem in athletics,” Sluss said.

After a lot of research, it was his idea to focus on concussions.

“It was a start, fail, start, fail process. This was the idea that we actually thought would work,” Holt said.

“What’s the first thing that happens when you go to a doctor if you have head trauma?” Sluss said. “They flash a light in your eye. It creates an objective response. The idea was to see if we could measure this objective response.”

After learning the technology already exists, the duo decided to pursue an app.

“There’s a big push right now to start moving through more personalized medicine techniques,” Sluss said. “Our smartphones are constantly taking data from our bodies. Why not utilize that data in a medical capacity?”

“Our entrepreneur in residence is Mike Shepard, and he has been helping us every step of the way, giving us tips and positive feedback as we move forward,” Sluss said. “He has probably been one of our biggest assets.”

Brightlamp is looking for investors and collaborators as they prepare to move into field tests. For information on contacting the company go to brightlamp.org

Sluss stressed that there could be a lot more to the app than just concussions. Brightlamp officials believe the technology can be used for autism, detecting the use of illicit drugs and other uses.

“We’re not a concussion company,” he said. “We’re trying to make the world medically mobile.”