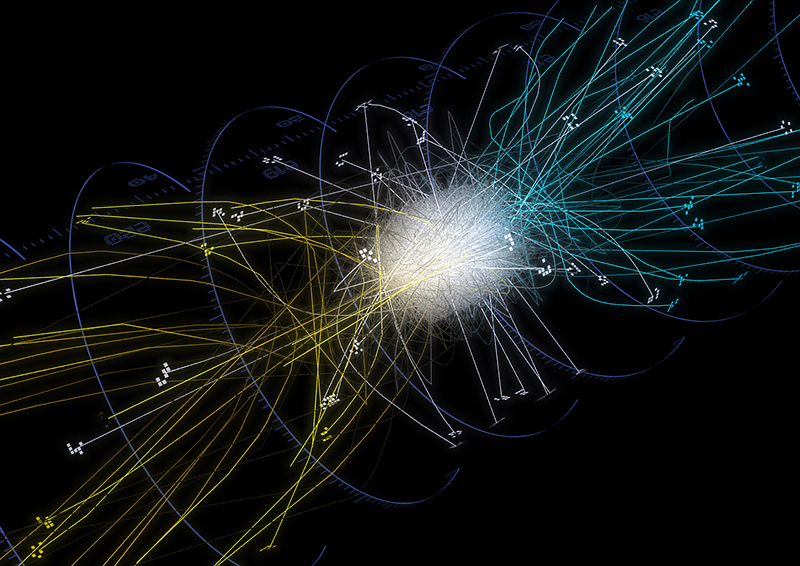 Trajectories of antihydrogen atoms from the ALPHA experiment conducted at CERN. Scientists announced this week that antihydrogen appears to have characteristics exactly the same as hydrogen, as predicted by the Standard Model of physics. (Image courtesy of Chukman So/University of Calgary) Download image

WEST LAFAYETTE, Ind. – A large, 54-member international team known as the ALPHA collaboration for the first time measured the wavelength of light emitted from an atom of antimatter - in this case, antihydrogen. The experiments were conducted at the high-energy particle accelerator operated by the European Organization for Nuclear Research (CERN) in Geneva, Switzerland.

Francis Robicheaux, professor of physics at Purdue University and a member of the ALPHA collaboration, says the goal of the experiment is to make high-precision fundamental measurements of an atom of antimatter. The hope was to find even a small difference between matter and antimatter, which might explain why everything we see is made up of matter only.

Antimatter was first theorized in the late 1800s, found in nature in the 1930s, and isolated in a laboratory in the 1950s. The ALPHA collaboration is the only scientific group to have the ability to conduct experiments on trapped antihydrogen atoms. The results were announced this week in the journal Nature.

Jeffrey Hangst, spokesperson for the ALPHA collaboration, said in a news release issued by Nature that the group takes advantage of the fact that antihydrogen has a very slight magnetic field to trap the atoms.

"Moving and trapping antiprotons or positrons is easy because they are charge particles," Hangst said. "But when you combine the two you get neutral antihydrogen, which is far more difficult to trap, so we have designed a very special magnetic trap that relies on the fact that antihydrogen is a little bit magnetic."

For this experiment, the scientists wanted to compare the wavelength of light given off by antihydrogen to see if it matches that of hydrogen atoms.

When moving between energy states, atoms give off light, with each element giving off light of a specific wavelength or color. Scientists often use this characteristic to identify the composition of materials of even far-off celestial stars.

"We can look at light coming from stars halfway across galaxies and we see the same colors we see in our experiments and we know what those wavelengths correspond to, so we know what types of atoms they are," Robicheaux says. "So we can say, oh, this star is made up of this much of this kind of atom."

For hydrogen, the wavelength of one of its characteristic transitions is known to a part in a million billions.

"Our experiment has measured the frequency of antihydrogen accurate to two parts per billion. This is fantastically accurate for a first measurement in a very difficult environment," Robicheaux says. “However, the measurement for hydrogen is about a million times more accurate, so we have plans for much improved accuracy.”

Antihydrogen is the simplest possible form of atomic antimatter, and scientists have gotten better about producing it, but that doesn't mean they've produced it in mass quantities.

"With a sodium street light, for example, to excite the atoms and make light, you just pass a little bit of electricity through the sodium, and there are gajillions and gajillions of atoms in that street lamp, so it's going to light up just fine," Robicheaux says. "In our experiment, however, we had just five to ten antihydrogen atoms at any one time, so we used high-powered lasers. We had to make sure that when those atoms hit the laser beam they knew it."

When the antihydrogen atoms hit the lasers they emitted a purple-ish light that was identical to that of hydrogen. For Robicheaux and other members of the ALPHA collaboration, exciting and disappointing at the same time.

"There are all sorts of groups probing the very edge of what we know, trying to measure these antimatter properties to one part in a million billion just to try to find one difference between antimatter and matter," he says. "When we do, that will affect our fundamental understanding of the universe."