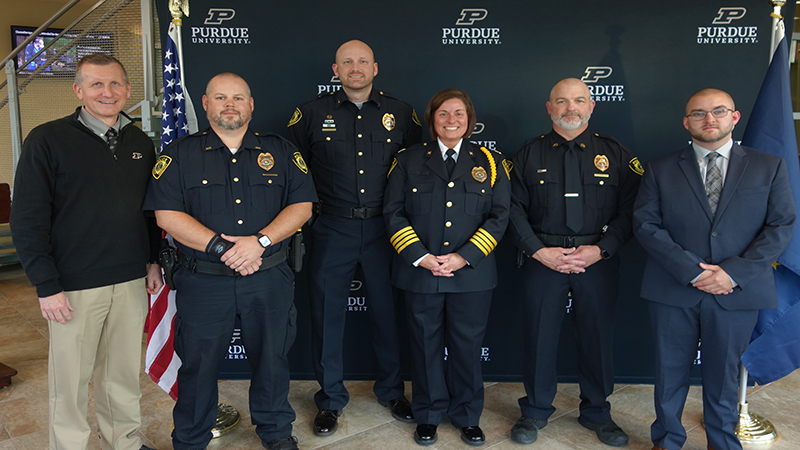 The Purdue University Police Department (PUPD) recently held a swearing-in and pinning ceremony to welcome a new police officer and promote several others within the department.

Officer Jacob Largent officially joined the department and was sworn in by Chief Lesley Wiete. Largent, who was already working for PUPD as a dispatcher, started in his new role on Nov. 7. Prior to coming to Purdue in 2021, he worked as a corrections officer for the Tippecanoe and Montgomery county jails.

Crosby is a graduate of Purdue and received a bachelor’s degree in law and society in 2007. While a student, Crosby was a member of the Purdue Student Security Patrol (PSSP), the group that runs the Safe Walk Program. He started with the department as a patrol officer shortly after graduating and was promoted to sergeant of administrative services in 2017. As a lieutenant, he helps facilitate traffic flow and parking controls for large events and serves as PUPD’s special events coordinator.

Edwards has been with the department since 2009, when he was hired as a patrol officer. He was promoted to sergeant of patrol in 2014 and was assigned to investigations in 2018 as a detective. In his new role, he is responsible for coordinating all training for PUPD and Commission for Accreditation of Law Enforcement Agencies (CALEA) reaccreditation.

Demello served in the U.S. Air Force and had many responsibilities, including serving as a K9 handler. He joined the Lafayette Police Department in 2003, where he also worked as a K9 handler. In 2016 he joined PUPD as a patrol officer and eventually became a K9 handler. He works alongside K9 Mocca, who is one of two dogs with the department certified in explosive materials detection.

“We are proud of these individuals as they celebrate career milestones. They are dedicated, hard-working and driven – all characteristics needed to be successful in this profession,” Wiete said. “Moving forward, they will each play a key role in the overall success of the department and keeping students, faculty, staff and visitors of our West Lafayette campus safe.”

PUPD is part of the Administrative Operations organization, which supports the university through safe, reliable and transformative services. Adding skilled new officers to the police force and promoting others within the department is one of many ways the organization helps powers Purdue.