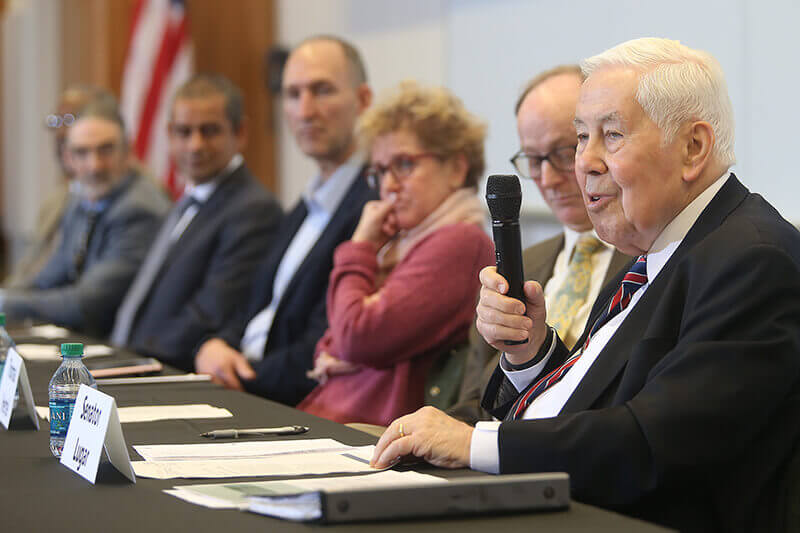 "We really have to support universities in about every country in the world," he said. "They will share our research, and we will learn from them. There has to be some basis on which countries gain the knowledge that is required to have some hope for food sufficiency."

Panelists addressed the complexity of food insecurity and its relationship to economic, political, geographic and cultural factors.

Ejeta noted that roughly 800 million people around the world experience food insecurity, many of them children. He stressed that the issue must be addressed across disciplines.

"There is not a better model for the transdisciplinary approaches than the land-grant university model of education, research and Extension," he said.

Brouder said developing new technologies was not enough -- those technologies had to be practical and useful for producers around the world.

"Part of our role as a land-grant university is to identify the technologies that can be adopted and show how they should be adopted," she said.

Following the panel discussion, Lugar continued his campus visit with a tour of the Purdue forestry and natural resources farm that bears his name.

The Richard G. Lugar Forestry Farm was named in 2014 to honor the former senator's longstanding commitment to science-based advances in forestry. The 175-acre farm promotes production of improved hardwoods to benefit Indiana's vital forest products industry. It operates primarily under the auspices of the Purdue Hardwood Tree Improvement and Regeneration Center, which Lugar helped create.