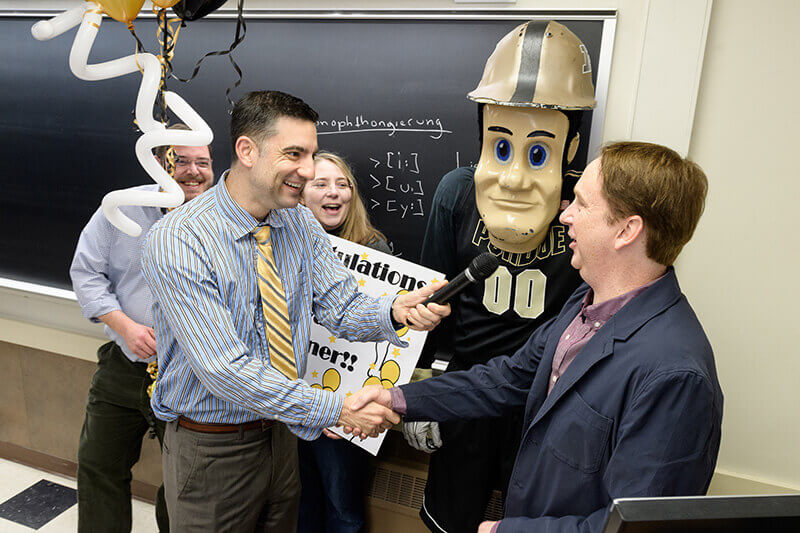 John Sundquist (right), associate professor in the School of Languages and Cultures, received the 2018 Outstanding Undergraduate Teaching Award in Memory of Charles B. Murphy on Thursday. Among those celebrating were (from left) Jason Baumer, continuing lecturer in German; David Nelson, associate director of the Center for Instructional Excellence; Colleen Neary-Sundquist, associate professor in Spanish and linguistics; and Purdue Pete. (Purdue University photo/John Underwood) Download image

John Sundquist, associate professor in the School of Languages and Cultures, has been named a recipient of the 2018 Outstanding Undergraduate Teaching Award in Memory of Charles B. Murphy. Sundquist, who teaches German and linguistics, was surprised with the news on Thursday (March 22).

The University's highest undergraduate teaching honor, the Murphy Award is accompanied by a $10,000 cash award and induction into Purdue's Teaching Academy, which provides leadership for the improvement of undergraduate, graduate and outreach teaching. Murphy was a history professor at Purdue from 1927 to 1970.

The recipients of both awards will be honored at an invitation-only luncheon on April 2. A list of past Murphy Award and Early Career Award recipients is at here. A list of all winners of teaching awards is at here.