Focus Awards recognize those committed to disability accessibility and diversity 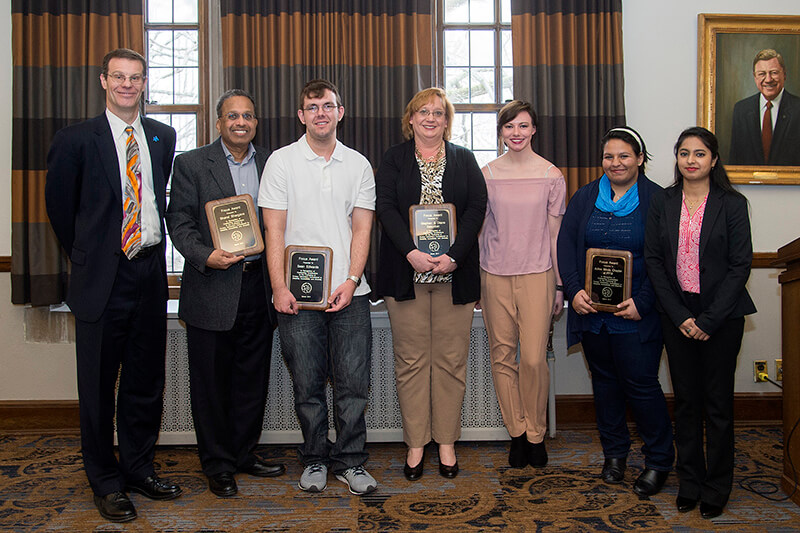 Five pioneers of disability accessibility and diversity were honored at a reception Thursday (March 2) as winners of the 2017 Focus Awards. This year’s theme was "I'm Not Your Inspiration."

The awards were presented at the Disability Awareness Month reception, held in Purdue Memorial Union. Erin Oliver, director of the Office of Institutional Equity, presented the awards. Amber O’Haver, executive director of the Indiana Statewide Independent Living Council, was the keynote speaker. Awards were presented to a faculty member, two staff members, a student and an organization affiliated with Purdue in recognition of their commitment to raising awareness and furthering access to education, work and play for individuals with disabilities.

The award recipients were:

* Faculty: Bharat Bhargava, professor in the Department of Computer Science, is passionate about expanding the authentic inclusion of diverse populations, including those with disabilities, in higher education. Bhargava designed a seminar course titled “Cloud Systems for Blind and Hearing Impaired,” which aimed to advance research and technology for those with visual or hearing impairments through the use of the latest cloud and mobile computing technologies. The course was supported with grants from Yahoo and Amazon and resulted in projects including a dollar bill identification system, pedestrian signal detector, and remote-controlled pedestrian software for blind individuals. Bhargava is dedicated to improving the lives of disabled individuals through research, interaction and creation of new opportunities.

* Staff: Diane Beaudoin, director of Institutional Assessment, and Stephen Beaudoin, professor in the School of Chemical Engineering, advocate for the improvement of Purdue’s insurance coverage for families with children with autism spectrum disorders. The Beaudoins are among the increasing number of families facing the challenge of finding and paying for the special educational and therapeutic services crucial for their children. At first, the insurance coverage offered by Purdue covered only a few hours per week of therapy and did not cover the needed interventions or the individualized services necessary to address issues across ASD cases. The Beaudoins’ experiences fueled a long-term effort to improve insurance offerings by the university, which resulted in a change in coverage that has since benefited many Purdue-affiliated families.

* Student: Sean Edwards, an undergraduate student in the College of Liberal Arts, was born with cataracts, which led to removal of the lenses of both eyes. After a retinal detachment caused him to lose his sight in his right eye, doctors prohibited him from participating in sports or other physical activity that might cause another detachment. Edwards has co-developed an official club at Purdue for the sport of goalball, a sport that was developed as a rehabilitation method for WWII veterans who lost sight in combat. Goalball is a three-on-three team sport in which each player is blindfolded and takes turns rolling a hard rubber ball with bells inside it toward the opposite end of the playing area, the other team’s goal zone. Because each athlete is blindfolded, they must judge the placement of the ball by the sound of the bells. Purdue Goalball is the first student organization to bring goalball to the Big Ten. In April 2016, Purdue Goalball hosted its first annual Regional Goalball Tournament, in which six teams from across the Midwest traveled to compete. The second Purdue Regional Goalball Tournament will take place late this April.

* Organization: Active Minds at Indiana University-Purdue University Fort Wayne promotes mental health awareness, suicide prevention and stomping out stigma. This chapter has participated in many programs and activities during the school year, including Suicide Prevention Week, the Out of Darkness Walk, Depression Awareness Day, Stress Less week before finals, the “D.O.R.A.” project, Eating Disorder Awareness week, and more. Active Minds works on the level of students to educate all across campus about mental health so that students who are first experiencing symptoms understand what they are going through, know it’s not their fault, and can get the help they need. Active Minds also works to help students understand how to talk to friends they are worried about and get them professional help. Every year, Active Minds works with hundreds of students on campuses to build a new generation of leaders who are more in tune with their mental health and the needs of others who live every day with mental health disorders.