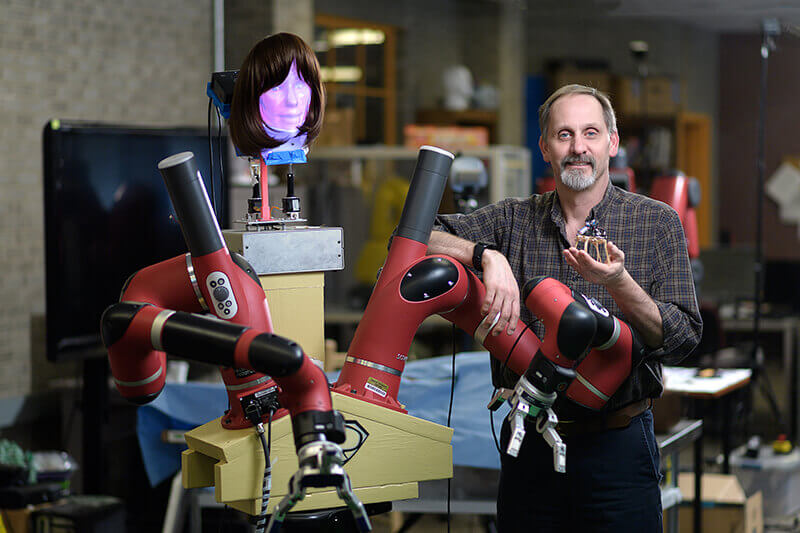 Richard Voyles, professor of electrical engineering technology in the Purdue Polytechnic Institute, finds inspiration in unlikely places. From the 1980s movie “Terminator” to office talk about the Three Mile Island accident, the professor has found paths into research and projects that established him as a national robotics expert. A College of Engineering alumnus, he now heads up the Purdue Robotics Accelerator after previously leading the National Robotics Initiative at the National Science Foundation and serving in the White House’s Office of Science and Technology Policy.

What spurred your early interest in robotics?

When I was an undergraduate at Purdue, I worked with an alum at a motor controls company, Dart Controls, in Zionsville. Three Mile Island happened just before then and we were sitting around thinking one day about what we would do if we were in charge. I decided we’d need a robot. It would need hands so it could turn valves and open doors and it would have to have vision. At the end of summer, I came back to the University and Purdue had a relatively famous robotics professor at the time, Richard Paul. I did a little project with him which ended up being my first publication and my interest in robotics has kind of snowballed since then. I went back the following summer to the same company and started building a prototype of the robot I thought up, a version called Robbie the Robot. I’ve really been working on robotics event since that little foray.

Your work in the Collaborative Robotics Lab mainly focuses on search-and-rescue robots. What inspired your research in this area?

For some of my initial work after earning my doctorate, I was doing a military robotics project. From that very first project, the value for search-and-rescue robots became immediately apparent. We were starting to build these robots that can get down into difficult areas, like rubble. That was the problem in search and rescue that no one at that point had been addressing. People were creating robots to climb over the rubble, but by the time a robot gets to an emergency response situation we’re talking hours into the situation. That’s a long time. What we’re talking about is using robots to look for people who are deeply entrapped in the rubble.

The Sept. 11 attack was actually the first use of robotics in an active emergency response. Now, the collapse of the World Trade Center towers was too devastating of an event to have many survivors, but what we did learn from that was robots were able to find things like remains that no human or dog could find. That drove this desire that we really need to crawl down into the rubble rather than just walk around on top. A crawler was the first tiny robot, called the Terminator bot after the robot in the final scenes of the original "Terminator" movie.

Your thoughts on robotics advancement from your first project to today?

It’s been amazing, but it’s also been exciting. Not just from the standpoint of research we do, which has allowed us to get into much more exotic things, but also the teaching. The interesting thing about robotics education -- which is really starting to take off as a freestanding discipline -- is that very few of the robotics graduates actually work at robotics companies. It’s an integrating education where you have to know a little bit about electrical engineering and sensors, mechanical engineering and actuators and also computation. Students with that combination of breadth and depth of knowledge and are able to see the big picture are valued in this. The level of technology is just changing so fast.