Did You Know?: First planes on campus 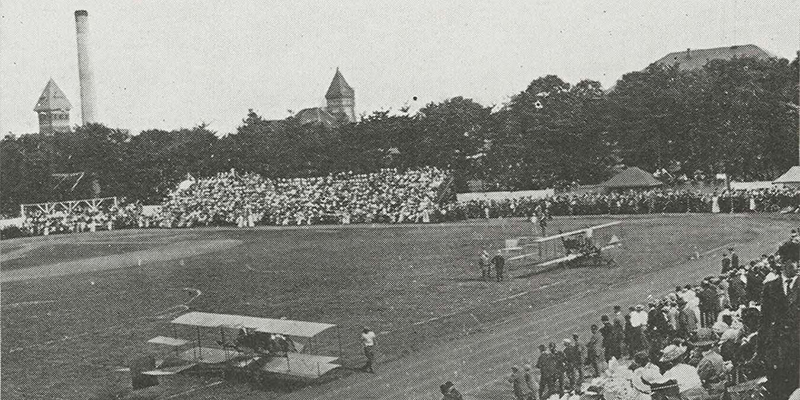 Seven and a half years after the Wright brothers flew at Kitty Hawk, a large crowd at Purdue welcomed two planes as they made the first aircraft landings on the campus.

According to "The Story of Purdue Engineering," the Purdue Aero Club was the first aviation club on campus and was organized by students and its first faculty director, Professor Cicero B. Veal of mechanical engineering, in the spring of 1910. Veal was the first faculty member to give active support to aviation. Among the club's first ambitions was to gather a collection of aeronautics literature.

Just a year after the Aero Club was founded, the Purdue Alumni Association and the Lafayette Morning Journal assisted the club in planning Aviation Day for June 13, 1911, during Gala Week, an old tradition where alumni returned and welcomed graduating seniors as new alumni. For the first time, planes and aviators were scheduled to be on campus.

Two airplanes were scheduled to be flown by their owners, Lincoln Beachey and C.C. Witmer of the Glen H. Curtiss Exhibition Co. George Ade, Purdue alumnus and humorist, and Winthrop E. Stone, Purdue president at the time, were to be air passengers for the first flight; however, high winds delayed the opening of the show and Ade and Stone were not permitted to fly.

The two planes prepared to take flight from Stuart Field, now the site of Elliott Hall of Music. Beachey flew over campus doing acrobatics at an altitude of 3,000 feet. Witmer's 8-cylinder engine had trouble before flight, and it was after 30 minutes of attempted repairs that he took flight with not all the cylinders firing. His engine went dead and had to make an emergency landing. He was found unhurt, having made a successful landing on the Purdue Farm.

Aviation Day drew a crowd of 17,000 to Purdue's campus. Spectators traveled from Chicago and other surrounding areas to witness an airplane for the first time.