Did You Know?: Ladies Hall 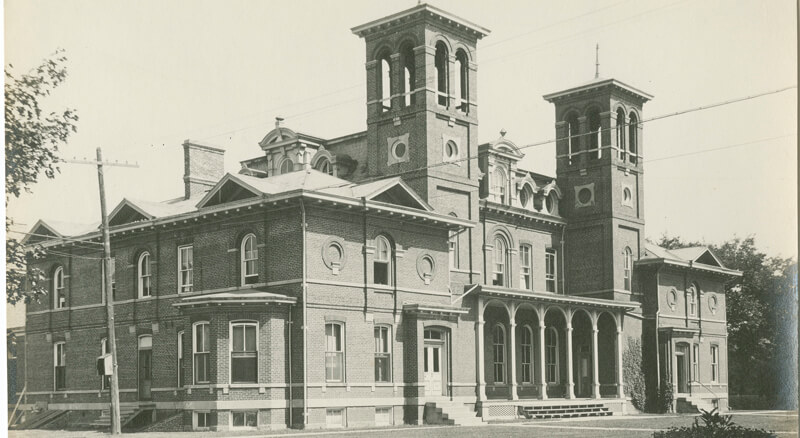 Ladies Hall is shown around 1929, the year that it was demolished. The building dates to around 1871 and was one of the original three buildings that made up Purdue's West Lafayette campus. (Photo courtesy of Purdue University Archives and Special Collections)

Ladies Hall, one of the original three buildings on Purdue's West Lafayette campus, was a majestic, vibrant structure that served several purposes until its demolition in 1927.

Like Purdue's two other original buildings -- Purdue Hall, a dormitory for men, and the Science Building, later known as the Pharmacy Building -- Ladies Hall dates to around 1871, shortly after the University's first trustees acquired the campus' needed land.

Around that time, John Purdue and W.H. Brown, a Lafayette architect, traveled to several colleges on the East Coast to gather ideas for the design of the University's inaugural buildings. Purdue's first structures, as a result, were reminiscent of that period's distinctive academic architecture, and Ladies Hall was no different, according to Robert W. Topping's book, "A Century and Beyond: The History of Purdue University."

Ladies Hall was a sprawling, two-story, red brick building with two towers and a porch over its entrance. Located near the present-day site of Stone Hall, its design was based on a building found on the campus of Amherst College in Massachusetts. Of the University's three original buildings, Ladies Hall was the most costly. Building it cost $40,000, according to Topping's book.

When Ladies Hall was completed before the start of classes in fall 1874, it was known as Boarding Hall. It contained the University's primary dining room as well as the living quarters for Purdue's faculty and their families.

It also housed the office of Abraham C. Shortridge, who was Purdue's second president, and the first to serve after classes on campus began. He succeeded Richard Owen, who was integral to Purdue's creation despite the fact that he served for less than two years.

In 1887, Emma Montgomery McRae, professor of English literature, began her tenure at Purdue, and until 1912 she served as matron of Ladies Hall and counseled Purdue's young women on every conceivable subject, according to Topping's book.

In addition to its role as a women's dormitory, the building briefly housed the nascent Home Economics Department, and before its demolition, it was also home to the Art Department. The latter use led some on campus to refer to the building as Art Hall.

From 1875 until Ladies Hall's demolition, it was a key site next to the Old Pump and an area known as "Lovers' Lane," which student couples used to arrange "chance meetings" to supplement their dating.

By 1927, Ladies Hall's facilities were outdated and University officials had made plans for the building of new student housing. Ladies Hall, one of the first major University buildings to disappear from campus, came down that year.