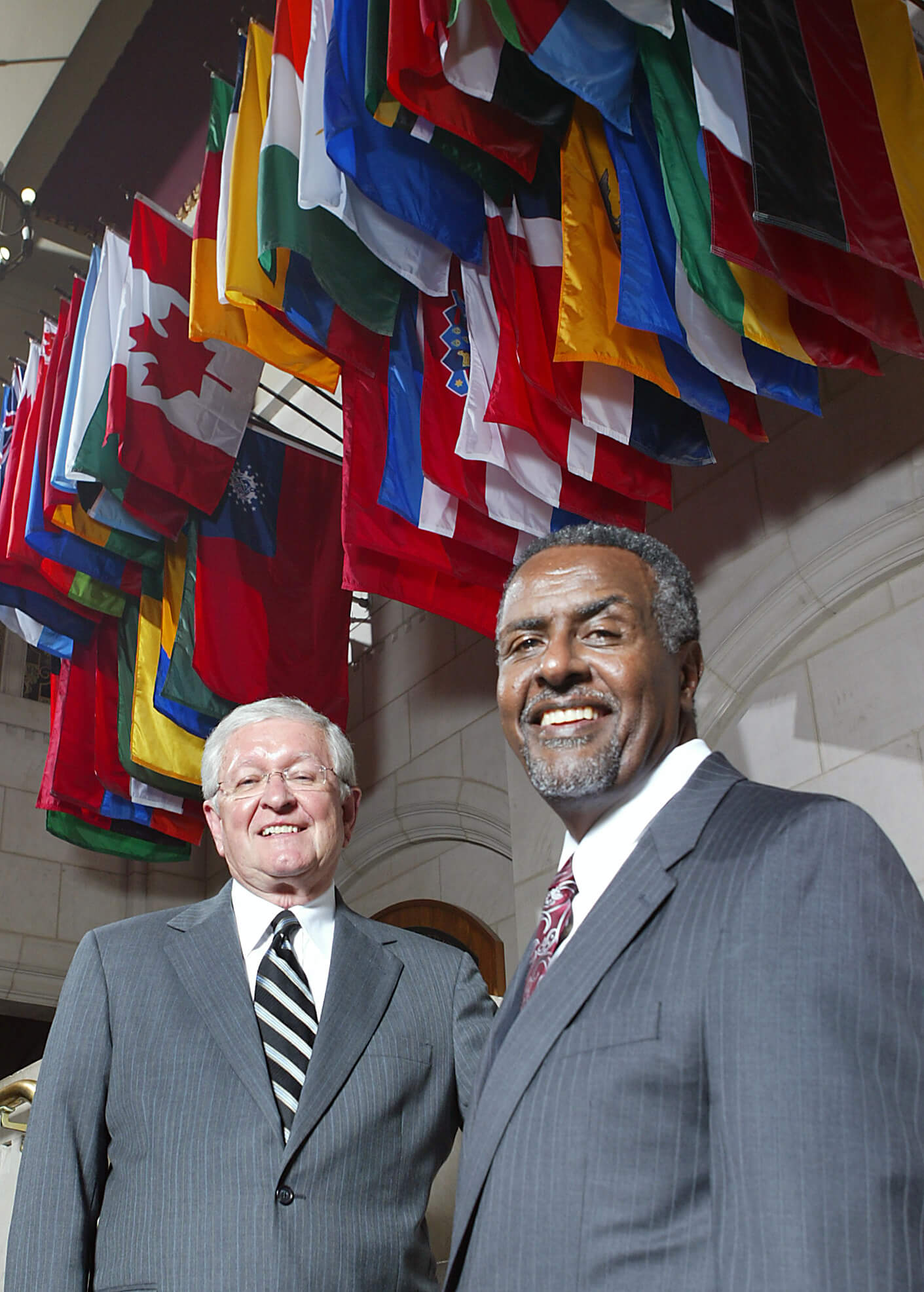 WEST LAFAYETTE, Ind. - The 2010 edition of the Purdue University Agricultural Alumni Fish Fry will feature not one, but two guest speakers.

The luncheon, scheduled for Feb. 6, begins at 11:30 a.m. in the Toyota Blue Ribbon Pavilion at the Indiana State Fairgrounds in Indianapolis.

"We are delighted that the Fish Fry's celebrity keynote speakers come from within our College of Agriculture family," said Donya Lester, executive secretary of Purdue's Agriculture Alumni Association.

"In the world of agriculture and food production, Philip Nelson and Gebisa Ejeta are superstars of the highest order. Worldwide, the World Food Prize is regarded as the Nobel Prize of Agriculture. It's significant, too, that they are not only members of our faculty, but are also Purdue Agriculture alumni."

The World Food Prize has been presented annually since 1987 by the World Food Prize Foundation and recognizes significant contributions in any field involved in improving the world food supply. The award was established by the late Norman E. Borlaug, winner of the 1970 Nobel Peace Prize.

Nelson, Purdue's Scholle Chair Professor in Food Processing and former head of the university's Department of Food Science, received the 2007 prize for developing scientific breakthroughs in the area of large-scale storage and transportation of fresh fruit and vegetable products utilizing bulk aseptic food processing. His work makes it possible for producers to store foods for long periods of time without losing nutritional value or taste.

In aseptic processing, food is stored at ambient temperatures in sterilized containers free of spoilage organisms and pathogens. The headspace inside the containers is then filled with an inert nitrogen gas.

In addition, Nelson produced a "bag-in-box" aseptic technology for transporting such products as tomato paste. More than 90 percent of the approximately 24 million tons of fresh tomatoes harvested globally each year are aseptically processed and packaged for year-round remanufacture into various food products, according to the World Food Prize Foundation.

Nelson retired as head of Purdue's Department of Food Science in 2003, a department he helped establish in 1983.

Ejeta, a native of Ethiopia and Purdue's Distinguished Professor of Agronomy, was honored with the 2009 World Food Prize for developing sorghum hybrids resistant to drought and the parasitic Striga weed. His hybrids have dramatically increased the production and availability of sorghum and enhanced the food supply for hundreds of millions of people in sub-Saharan Africa.

Sorghum is an important cereal grain to Africa, but arid conditions and the deadly Striga make growing the crop difficult for farmers.

Ejeta began researching genetic answers as a graduate student at Purdue in the mid-1970s. His work took him to rain-starved northern Sudan after receiving a doctoral degree in plant breeding and genetics from Purdue in 1978.

Ejeta then turned his attention to Striga - an insidious weed that can cause crop losses of 40 percent in sorghum fields. After 15 years of research, Ejeta and late Purdue colleague Larry Butler identified a chemical signal in sorghum plants that attracts Striga rootlets, which work their way into sorghum plants and remove valuable nutrients. That discovery led Ejeta to develop a biological mechanism for interrupting that chemical signal.

In 1994 eight tons of Ejeta's drought-tolerant and Striga-resistant sorghum seeds were distributed to the African nations of Eritrea, Ethiopia, Kenya, Mali, Mozambique, Niger, Rwanda, Senegal, Somalia, Sudan, Tanzania and Zimbabwe. Farmers in those countries reported yields of as much as four times larger than traditional sorghum crops.

The Fish Fry is honored to have two agricultural research giants as guest speakers, Lester said.

"I can't think of anyone more fitting to address our annual meeting and bring a message of the important role that agriculture research plays in assuring food security for the world's population," Lester said.

Tickets for the Ag Alumni Fish Fry are $20 and must be purchased in advance. Tickets are available by contacting the Purdue Ag Alumni office at 765-494-8593 or by e-mailing agalumni@purdue.edu.

Known as a fish fry by tradition, the menu features both Indiana farm-raised yellow perch and roasted pork loin entrées. The perch is donated by the Indiana Soybean Alliance, while the pork loin is donated by Indiana Packers Corp. Dietary accommodations and substitutions are available by advance reservation.

Complimentary on-site childcare is provided if arranged in advance.

The Ag Forecast, a program highlighting important topics in agriculture, will precede the Fish Fry starting at 9:30 a.m. in the Grand Hall, also located on the fairgrounds.

Note to Journalists: Reporters and photographers are welcome to attend the Agricultural Alumni Fish Fry and the Ag Forecast that precedes the luncheon. For more information, contact Steve Leer, Purdue Agricultural Communication, at 765-494-8415, sleer@purdue.edu.