Today was the fifth day in the great city of New York. I groggily awoke to the melody of my alarm in a state of anger, because I am the farthest thing from a morning person, but my mind instantly remembered the importance of today, for it was the day of my first demonstration with Act Up. As I put on my Act Up gear, I couldn’t help but imagine what it was like for the founders of Act Up on their first demonstration. Did they have as many butterflies in their stomach as I did? I quickly erased any fear in my mind as we listened to the powerful words of Jim Eigo in the LGBT Community Center. He reminded us the key objectives of our demonstration that was to take place at noon. While he explained the history of the epidemic and Chelsea clinic’s situation,  I could feel the sense of urgency grow in the room. I could see the anger, fear, and pain in the eyes of those who have lived through the first epidemic, and are watching as a new one could soon unfold. My anger soon turned to confusion, if the city has the means to prevent another outbreak, why are they not saving their people? Why do these companies charge unreasonable prices for medication that keeps HIV positive people alive? Are there really people in this world that would rather make money off of this epidemic than eradicate it? 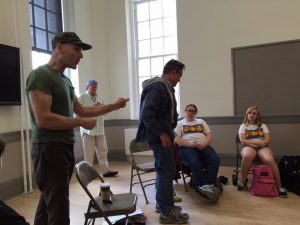 My confusion, frustration, anger, and passion boiled inside of me as we made our way to the demonstration. I never thought I would be involved in a protest, much less a “die in”, but as I lay on the cool concrete of the sidewalk surrounded by my classmates, something sparked inside of me. I could feel the energy of Act Up members who have passed standing with us, filling the air with a very present electricity. The chants flowed out of my chest, but these were not just my words. Our words were for everyone who is affected by the ignorance of the city. Our words were for all those who have died because they couldn’t get help from a clinic, and for those who will be affected because of this clinic closing. Participating in this demonstration is not just for our own personal gain; this demonstration has a much bigger meaning. Our demonstration could save hundreds upon thousands of lives that could be taken because there is no working alternative in place for the renovation of the Chelsea clinic, if the city chooses to ‘act up’. As the demonstration came to a close and we made our way back to the center with a raw throats from shouting the words that could change a city, a feeling of calm swept over me. I had never in my life been a part of something that could directly change and save peoples lives. While our demonstration might not have an immediate change on the outcome of the Chelsea clinic, it provided me with hope that the city will work to create an alternative for the safety and health of its residents. 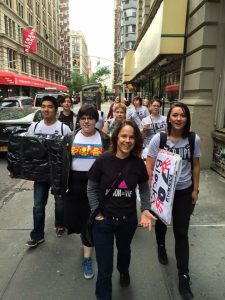 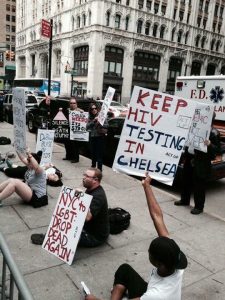 Within a dimly lit room of the center, a slideshow educated us about what AIDS truly is. I could feel the passion that rose from James Krellenstein’s chest as the charts and graphs from the CDC show how this epidemic is not over. It is a battle that is still being fought, and the numbers don’t lie. I learned that certain populations were more at risk, and how AIDS in itself is racist, targeting the African American population, especially trans women of color. The explanation behind this phenomenon is both easy and hard to define and is a topic I thoroughly look forward to investigating. Learning the statistics of this virus took an emotional toll on me. It is a disease that is threatening the community that I hold so dear to my heart. There is a way to eradicate this terrible virus, and it is my generation’s job to work as hard as we can to remove this plague from our community and our world. Walking back to our dorms with a heavy heart, I thanked every person that has had any part in Act Up in my head. Without this organization, I can’t imagine what the epidemic could have looked like. 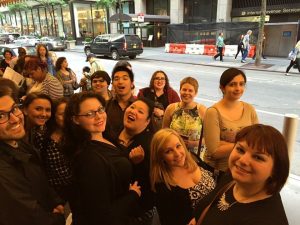 The heaviness of my heart slowly lifted as the excitement for our theatre outing came closer. As we stand in line for the show, Darren Criss’ made up eyes watched from the side of the Belasco theatre, almost a warning for the intensity of the show I was about to witness. In a packed theatre with a very excited group surrounding me, the first chords of the show started off with a bang, and quite a fabulous wig. I saw as an actor I adored on television as a teen turn into a magnificent Hedwig, with all of her glory. Within the brilliant acting of the cast, it became so obvious to me how performative gender truly is. The roller coaster of a script filled my heart with both joy and sorrow. While we laughed at the mishaps of a trans woman in the 60’s, we watched the heartbreak that is all too real for trans women from past and present. A line that struck close to home flowed eloquently from Hedwig’s painted lips, “I laugh, because I will cry if I don’t”. Within the LGBTQ+ community, times of heartbreak seem unavoidable with the society we live in, but we must stand strong in the face of adversity, just as Hedwig did. 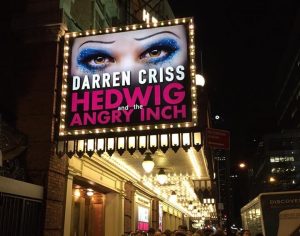 Going to sleep tonight, I hope to have dreams filled with the energy I felt today in City Hall Park. It is days like today that remind me how privileged I truly am to be on this trip with such amazing professors and students. I can slowly but surely feel my sense of self becoming stronger and more resilient each day we spend with fascinating people who are kind enough to give our group a portion of their time and knowledge. I will leave you with these parting words in light of our demonstration; ACT UP. FIGHT BACK. END AIDS! 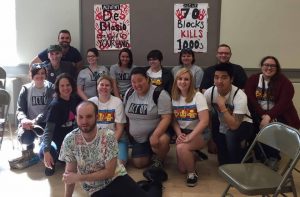