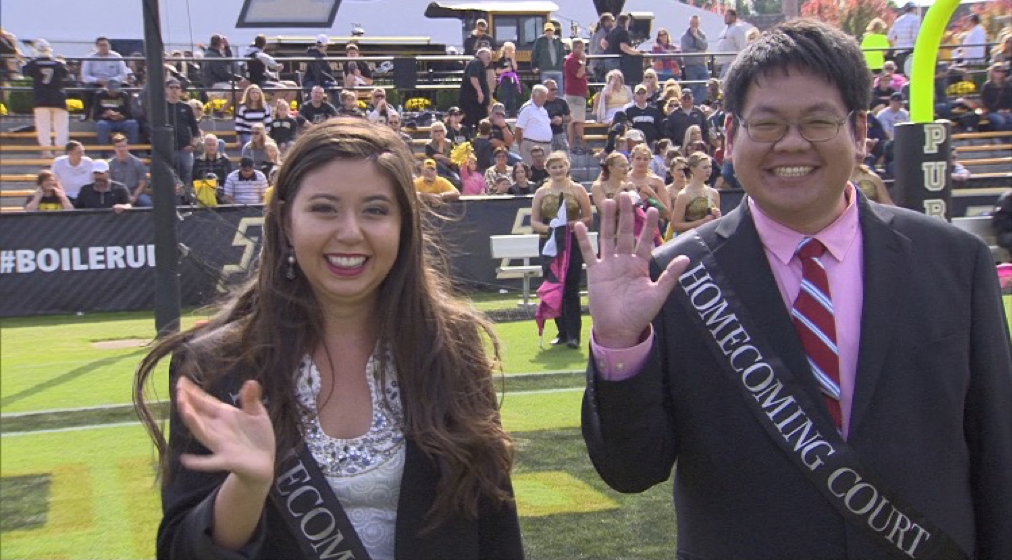 This week is Purdue Homecoming week. What is homecoming? I looked up the dictionary and could not find a good translation since in Asia we don’t have this term. Homecoming is an annual tradition in the United States. People welcome back alumni and former residents with a series of activities such as a banquet, a football game played on a school’s home football field, and a parade featuring the school’s marching band. Besides these activities, the school also selects homecoming court. The homecoming court is a representative group of students who are completing their final years of study at their school and who have done a lot to contribute to their school. It is extremely honor to be selected in the court. The entire student body votes for the Queen and King.

In 2016, the Purdue Student Union Board was looking for involved and enthusiastic candidates for the 2016 Homecoming Court. Selection of the court was based on the candidate’s essay, resume, academic achievement, extracurricular activities, and community involvement. I told myself that I should give a try in my school life! I had a strong involvement at Purdue, doing tons of volunteering service, building leadership at many organizations, and receiving many scholarship and awards on campus. Therefore, I started to write the essay why I was proud to be Boilermaker and what my most rewarding Purdue experience was and why.

After being selected, I was planning to make a fun and attractive button and a catchy slogan during the campaign. In 2016, people were crazy for Pokemon Go. Therefore, I decided to make a poke ball button so people could catch me all. Some of my friends helped me design as well. Where should I put my name in the ball? How big of my name should be in the button so everyone could see it clearly. What font should I use? What color of poke ball should I choose? Generally the ball was red, but the red color was a feud color. After long discussions and modifications in several weeks, I used Purdue gold for showing my loyalty.

For the slogan, since my number was five, I had give me five, pick I-Fan and high five I-Fan. But I was not satisfied with them until a teacher suggested me the catchy slogan: “I am a Fan of I-Fan.” Therefore, I also made a formal button and a banner for it.

The official campaign started on Monday 6pm and lasted for ten days. If candidates did any advertisement before 6pm, they would lose points. At 8pm, I started to post my flyers and I saw some candidates’ posters at every store around Chauncey Hill. Only two hours! I could not believe that they did it so fast in only two hours. They must have had a campaign team! My friend and I only posted 5 flyers in the first evening. I had no experience of campaigning and got very frustrated. However, if I gave up now, the game was over ahead of time. I would not be easily defeated. The next day, I sank my teeth into the campaign. I carried my heavy posters to every restaurant and store off-campus for their permission to post my flyer in their places. Most of them were happy to support and were super proud that I was selected in the homecoming court. Finally, I distributed around 60 posters in the Greater Lafayette. I even distributed my poster to Silver Dipper located in Sagamore Parkway and in Exploration Acres, the largest corn maze in Northwest Indiana. People told me that they saw my posters everywhere. I made my goal.

On Thursday, I just realized that if I chalked on concrete sidewalks, I did not need to clean it after the campaign since the rain would wash it automatically. Therefore, I started to chalk. One of the reasons was I had given out all 300 buttons I made. But rather than generally chalking such as vote for I-Fan, my friend told me that we could chalk poke balls just like the button I designed. So, we chalked several fun poke balls on the ground. Unfortunately, this chalking disappeared the next day. There was no rain in the evening. I was very disappointed but I had not given up. During the weekend, I was on fire. I chalked a lot in the popular and important places on campus such as CoRec entrance, Engineering Mall, PMU, bus stop, and Elliot Hall. Take a look. The fun fact was other candidates mimicked my idea and started to chalk creatively. The PSUB Homecoming committee also told me I did a great job.

During the campaign, I also showed my big banner when walking on campus or on bus. In the beginning, I was shy and embarrassed. I did not like people staring at me all the time, but it was also a good time to be brave. I would regret if I did not do my best. Therefore, in the last two days, I held my banner naturally and gracefully walking on campus.

The final selection was based on the interview (50%) and general body votes (50%). The formal interview was held by a panel of judges composed of faculty, staff, students, alumni and community leaders. The interview was about 15 minutes with six questions. 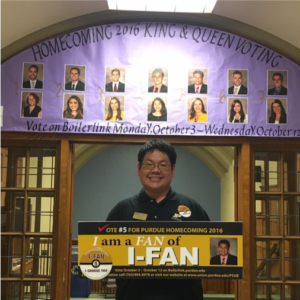 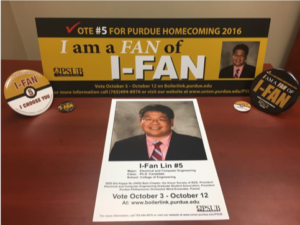 But I was told by PSUB that I got the most popular vote! My hard work paid back. (That was also my main goal.)

I was honored to be selected in the homecoming court, and really glad to have this opportunity to be involved in the American’s tradition. I also thank my friends and many organizations with their fully support such as PGSG and Purdue Bands & Orchestras Department. My advisor also was excited and gave me some suggestions for the campaign. Some of my friends told me in the beginning that it was impossible to get votes and competed with undergraduate students. But, you never know until you try. Never give up and nothing is impossible!