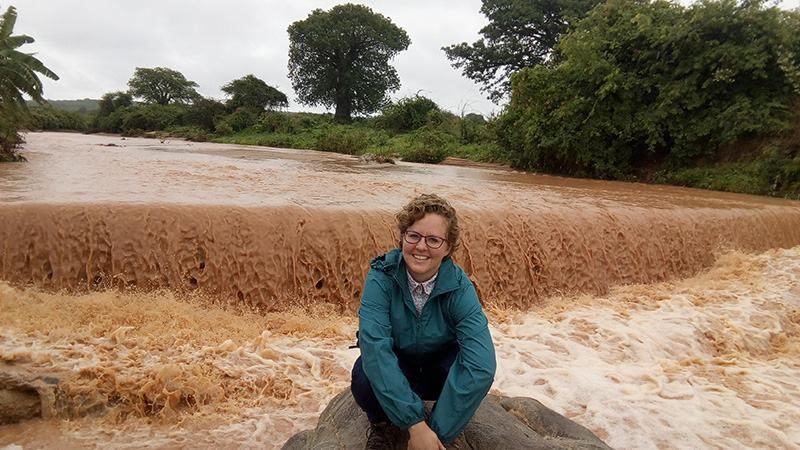 In 2016, Eisma was awarded a pair of prestigious research grants — totaling more than $45,000 — from the Fulbright U.S. Student Program and the U.S. Borlaug Fellows in Global Food Security Program to study the ecological impact of sand dams in Tanzania. She flew to Africa in August 2016 to begin her study, which is the basis for her doctoral thesis.

Eisma, whose focus is in hydrology, investigated the ecological impacts of three sand dams in collaboration with researchers from the Nelson Mandela African Institute of Science and Technology.

In semi-arid regions of the world, sand dams are useful for capturing and storing rainwater into the dry season. The water is used for domestic or agricultural purposes, saving women and children up to three hours each day normally spent collecting the family’s water.

Her research aims to develop an understanding of how sand dams influence both the physical and biological changes that occur after a sand dam is constructed. Preliminary results indicate that a typical sand dam actually has a much smaller impact on groundwater levels than previously believed. Studies thus far have largely been performed on the “ideal” sand dam, when in reality up to 60% of sand dams are silted and therefore non-functioning. Furthermore, Eisma has found little to no trace of macroinvertebrate life in sand dams, hinting that sand dams do not create a suitable habitat.

This research is particularly important, because NGOs across sub-Saharan Africa are increasingly building sand dams, yet few field studies have been conducted to understand the greater impacts of these structures. Eisma says, “As civil engineers, we are constantly addressing the consequences of decisions made when certain concepts were still largely misunderstood. In a similar vein, I hope my research helps illuminate both the positives and negatives of sand dams before over-development occurs.”

Eisma also worked closely with local community water groups to achieve her research objectives. Volunteers from the community were trained by Eisma to take daily measurements of climate data and water table depth as well as bi-weekly erosion measurements. The volunteers will continue collecting data until Eisma returns to Tanzania in December 2017 for a two week data validation trip.

About her year in Tanzania, Eisma says, “The challenges were definitely greater and different from what I was expecting, but I am grateful for the opportunity to learn and conduct research in Tanzania. This experience has been irreplaceable in terms of developing cross-cultural competence and refining my scientific communication skills.”

Eisma plans to pursue a professorship at a research university after completing her PhD at Purdue.