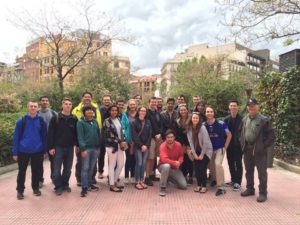 I learned Spanish as my second language ten years ago. When I took the course, the instructor said that if you want to improve or even make a great progress of your Spanish, you must go to Spain or any other country speaking Spanish. Two years ago when I walked in the hallway in MSEE building, a professor asked me ”Are you interested in being TA in study abroad course next Maysemester? We will go to Spain for three weeks.” What? Going to Spain! Yes! Absolutely! 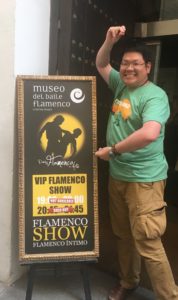 I went to Spain in May semester in the past two years. I have been to Madrid, Barcelona, and Seville. I spent three weeks each year in Spain and learned a lot of fun Spanish culture. The class was in the whole morning everyday and students might do their homework in the afternoon or visit attractions around the city. As TA in this class, my job was to take care of all the students not only on their homework but on their safeties as well. Most of the time, I roamed in the city with the students, having the must-eat paella, must-watch flamenco dance, and must-visit Basilica of the Sagrada Familia. We also found a bistro serving almost unlimited tapas. You ordered any kind of drinks and the bistro gave you all tapas they made. The tapa is one of famous cuisine in Spain. You may think tapa as appetizer. It may be cold or hot. In fact, a tapa is a small portion of any kind of Spanish cuisine. 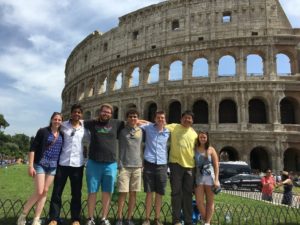 In the first year, five students and I decided to visit Rome at the last minute on the three-day long weekend. I made an absolutely wise decision to visit another country. I never forget what a colossal coliseum it is. When I went out of the subway, I was not ready yet to see the amphitheater. But, this tremendous building, one of seven wonders of the world, was right in the front of me. I couldn’t wait to visit inside. To my surprise, in the arena, I ran into a college friend who we have not met for more than ten years after the graduation. What a small world! It reminds me that all roads lead to Rome. So, next time if you really want to meet someone, go to coliseum! 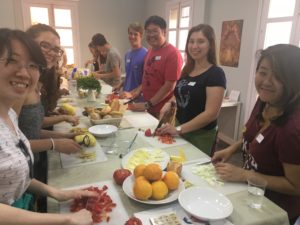 This year, we had a cooking class. We learned to cook one of the famous Spanish food: tortilla (Spanish potato omelette). The chief told us the procedure. We peeled potatoes and cut them as diced potatoes. Then, we deep-fried the diced potatoes. After that, we put the fried potatoes into the eggs and slice onions. Mix and smear evenly before we pan-fry them. The difficulty was to flip the thick omelette and pan-fry again. I love this dish. Students and I were glad that we had a great opportunity to cook Spanish food taught by real Spanish people. The fun fact is the day after I came back to the U.S., I went to the supermarket and bought the ingredients to make the tortilla again.

At Sevilla, we had pre-talk of bullfight.We learned the history of bull fight and why Spanish people had bullfight. The bull fighter, called the matador, also wore his custom and told us the function of each part he had. Some students and I also went on stage experiencing how to trick the bull with their big and heavy red rag. Some students refused to watch bullfight in the beginning because they thought it was really cruel. However, after the pre-talk, they learned the custom/reason why Spanish people continue to have this event each year and how they were going to treat the bulls after they were killed. Some students changed their minds and would like to watch the game in live because they wanted to be more involved in Spanish culture not just listening the presentation but also watching the real show. They wanted to see what was going on and tried to deal with the cultural difference. Not always thinking from their own side, students wanted to pretend they are Spanish and figure it out why the bullfight event continues. This is also the spirit of Boiler Abroad.

I was glad that I had the chance to visit Spain and practice my Spanish. I also immersed myself into the local culture. It was a great experience to learn professional and cultural knowledge at the same time. This program provides me to gain global perspective and intercultural experience. If you have this chance, don’t miss it!