In your study of statics, you have learned that if forces act at only points points on a rigid body, then the resultant forces acting at these two points must be collinear in order for the body to be in equilibrium. This result is readily proved by using the equations of equilibrium for the body. 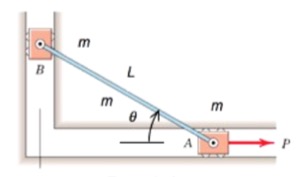