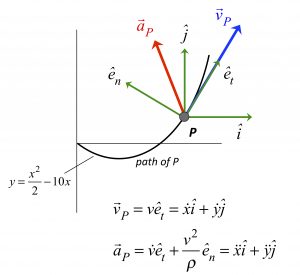 Particle P moves on a path described as above in terms of Cartesian components. The x-component of velocity for P is known to be a constant. What we want, however, is an understanding of the path description; in particular, what is the rate of change of speed of P as it moves along the path?

The animation above shows the acceleration to be strictly in the y-direction, as expected. The rate of change of speed is the projection of this acceleration vector onto the unit tangent direction.