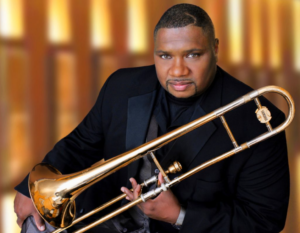 Wycliffe Gordon – Wycliffe Gordon experiences an impressive career touring the world performing to great acclaim from audiences and critics alike. Jazz Journalists Association named him 2020 “Trombonist of the Year” for the record breaking 13th time, and he’s topped Downbeat Critics Poll for “Best Trombone” again for an unprecedented six times (2020, 2018, 2016, 2014, 2013 & 2012). Last year he was the recipient of the “Louie Award”, the International Trombone Award and the Satchmo Award, among others. Wycliffe is a prolific recording artist and is extremely popular for his unmatched signature sound, plunger technique and unique vocals. He can be heard on hundreds of recordings, soundtracks, live DVD’s and documentaries. In addition to an exceptionally successful solo career, Gordon tours regularly leading his quintet, headlining at legendary jazz venues and performing arts centers throughout the world. He is commissioned frequently, and has an extensive catalog of original compositions that span the various timbres of jazz and chamber music. Musicians and ensembles of every caliber perform his music throughout the world and his arrangement of the theme song to NPR’s “All Things Considered” is heard daily across the globe. Gordon is a former veteran member of the Wynton Marsalis Septet, the Lincoln Center Jazz Orchestra and has been a featured guest artist on Billy Taylor’s “Jazz at the Kennedy Center” Series. Gordon is also one of America’s most persuasive and committed music educators, and serves as Director of Jazz Studies at Augusta University in Augusta, GA. Wycliffe Gordon is a Yamaha Performing Artist and has his own line of Wycliffe Gordon Pro Signature Mouthpieces by Pickett Brass. Visit www.wycliffegordon.com. 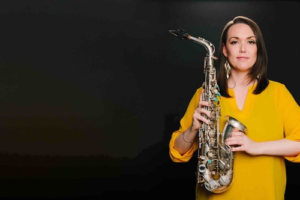 Erica von Kleist – Having graduated from the Juilliard School, Erica’s first endeavors were as a sidewoman in several jazz ensembles, including the Jazz at Lincoln Center Orchestra with Wynton Marsalis, Chris Potter’s Tentet, and Rufus Reid’s big band. Throughout her tenure in NYC Erica was awarded several accolades from ASCAP and the Martin Segal Foundation at Lincoln Center, in addition to releasing several albums as a bandleader. After touring and recording for many years, Erica then found herself in the orchestra pit for The Addams Family on Broadway, which solidified her love and passion for musical theater. In 2012 Erica relocated to Whitefish, MT where she started several business endeavors, began a teaching studio, self-published a music theory textbook, and discovered her talents as a songwriter and comedian.

In the last few years Erica has written two musicals, one staged and one as a film, in addition to her hilarious one-woman comedy show BOOBS! Erica is also a part of a masterful jazz partnership with tap dancer DeWitt Fleming Jr in their project Sax & Taps. 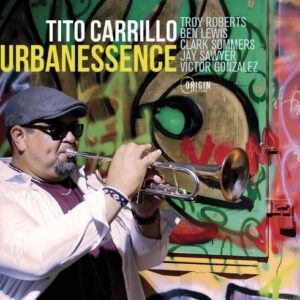 Tito Carrillo – Tito Carrillo is a trumpeter, composer, and educator, whose music blurs the lines between Afro-Caribbean music traditions and modern jazz. Carrillo came to prominence in the mid 90’s in Chicago’s rich jazz and Latin music scenes, becoming a top call soloist, sideman, and bandleader. His critically-acclaimed solo debut album Opening Statement was released on the Origin Records label in 2011. 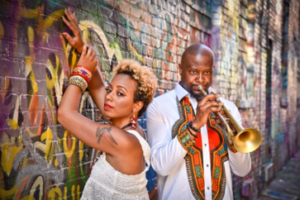 Sean Jones Dizzy Spells – Dizzy Spellz offers an afro futuristic lens into a deeper look at the intersecting cultural and spiritual dilemmas within the African diaspora through the music of Dizzy Gillespie.

From his coming of age through the racial and social dynamics in the Deep South, creating and curating the bebop movement in New York, to his spiritual journey to Africa and his delve into Afro Cuban music and the Baha’i faith, Dizzy was very much a head of his time.

Artists Sean Jones (trumpeter/musical director) and Brinae Ali (choreographer/tap dancer/vocalist) have teamed up to create a piece that fuses elements of jazz, tap, Hip Hop, and Bebop to articulate the social vernacular language of the Aftrican American experience. 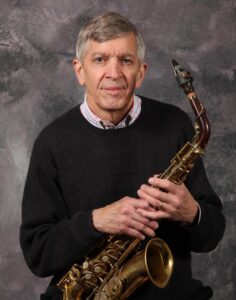 In 1989, the International Association of Jazz Educators inducted Jamey into their Hall of Fame at the San Diego convention. With this award, Jamey joins other jazz luminaries such as Count Basie, Duke Ellington, Charlie Parker, Louis Armstrong and others.

Jamey is a internationally-known saxophonist and authority on jazz education and improvisation, and has developed a series of Jazz Play-A-Longs (book and cd sets (now numbering almost 130 volumes) as well as various other supplemental aids for the development of improvisational skills. The Aebersold book and recording sets allow a musician the opportunity to practice and improvise with well-known jazz personalities at home as well as in the classroom. The recordings employ some of the best jazz musicians in the world. This concept has been responsible for changing the practice habits of thousands of musicians around the world.