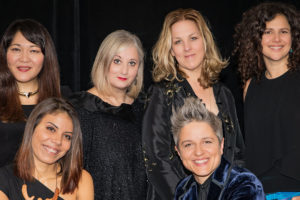 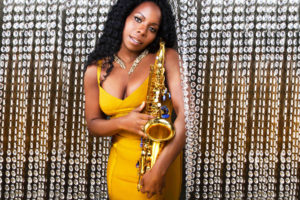 When Grammy-nominated Mack Avenue recording artist, composer, and bandleader Tia Fuller picks up her saxophone, something amazing happens. Blending technical brilliance, melodic creativity, and the performing precision drawn from both her academic and stage experience, Fuller is a force to be reckoned with in the worlds of jazz, pop, R&B, and more. Currently, Fuller balances the worlds of performance and education, fulfilling a demanding schedule as both a busy touring and recording artist and a full-time professor at the Berklee College of Music in Boston.

As a Professor at Berklee College of Music, Fuller shares her expertise with more than 70 students per week. She leads the college’s Rainbow Big Band and All-Stars, the Esperanza Ensemble, repertoire class, jazz improvisation, two jazz combos, and the Christian McBride Ensemble. In addition, she produces and directs groundbreaking large production ensembles focusing on the works of major pop innovators Beyoncé, Bruno Mars, Ariana Grande, and Micki Miller. Innovated by Fuller to provide more contemporary, real-world experiences for students, these ensembles are cross-collaborations with other college departments and duplicate an “A-list” tour production incorporating musicians, choreography, strings, dancers, video, and lighting. As an artist, performer, and teacher, Fuller feels that she is fulfilling her purpose here on this earth, which is to “serve as a light for others.” 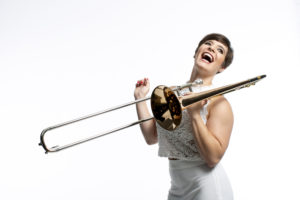 The media refer to #1 selling artist, Aubrey Logan as “The Queen of Sass,”  and it’s easy to see why. Her concerts are a mix of excellent musicality, jaw-dropping vocals, expert trombone-playing, a breathtaking array of originals and original takes on cover songs and, well…fun! Her heart wrenching musical stories has audiences in tears just before her comedic relief has them in stitches.

The Seattle native, trained in trombone performance at Berklee College of Music, Logan soon after made her way to Los Angeles, with dreams of becoming L.A.’s “most cerebral musician with a personality”. Once there she created her own path, lining up professional work with acts as disparate as the Boston Pops, Pharrell, Josh Groban, Seth McFarlane, and Meghan Trainor, and at the same time amassing a huge online following thanks to her performances with the YouTube phenomenon PostModern Jukebox.

Her debut, Impossible, was a top 10 album on the iTunes, Billboard and Amazon charts. Her appearance on  Summer Horns II, from A to Z, as a special guest of Dave Koz and Concord Records, became the No. 1 selling Contemporary Jazz Album. Aubrey’s features on Jimmy Kimmel, The Grammy Awards, a PBS special and London Live have kept her in the public eye and millions of fans have watched her head-spinning videos on YouTube and Facebook.

Aubrey is a transplanted Angeleno, with a love for all things on the sunny side of Southern California and a sharp wit about all its pitfalls. On her second studio album, Where the Sunshine Is Expensive, Logan pays homage to her adopted hometown, as only the Queen of Sass could: with a twinkle in her eye and a newfound confidence in her mind.

Aubrey Logan has performed more than 250 shows since 2016. Written in airports around the country (and in LAX, of course), Where the Sunshine Is Expensive came together as Logan accepted that love it or hate it (but mostly love it), L.A. has her heart. 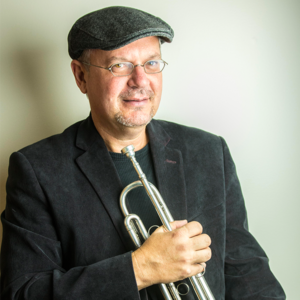 Mark Buselli is director of jazz studies at Ball State University. Buselli has over fifty arrangements published for big bands, brass ensemble, and piano/trumpet. He has ten recordings out as a leader on the Owlstudios and OA2 record labels. He has performed with many notable artists and has played for four United States presidents.

Awards include: 2010-11 BSU College of Fine Arts Dean’s Creative Arts Award, Creative Renewal grant from the Indianapolis Arts Council in 2005, Teacher of the year award in 2004 at Butler University, Creative Vision award from NUVO in May, 2007, ¨Top ten CD release of 2009 (Dec 09) in JAZZIZ magazine for “An Old Soul,” ¨Top 100 CD of the decade (Jan 10) in Downbeat magazine for the Buselli/Wallarab Jazz Orchestra (BWJO) release of “Basically Baker,” 2012 Jazz Times Critics poll as being one of the five finalists for Large Jazz Ensemble of the year (BWJO), 2016 Basically Baker vol. 2 release (BWJO) went to #17 on the national jazz charts, and a 2017 inductee to the Indianapolis Jazz Hall of Fame.

Mark was the featured trumpet soloist on the award winning short film “Claire and the Keys” released in 2015. Mark was a semi-finalist judge for the 2017 Essentially Ellington competition held at Lincoln Center in NYC and has served as a finalist for the National Jazz Trumpet Competition.

He has taken his college bands on tours of Russia, China, Germany, Italy, France, Poland, Switzerland, and the Czech Republic. Buselli currently serves as Education Director of the Buselli/Wallarab Jazz Orchestra in Indianapolis where he has created numerous educational opportunities for over 50 thousand students with their relationship to Arts For Learning of Indiana.

Mr. Buselli graduated from Berklee School of music in Boston and received his MM in Jazz studies from Indiana University. While at Indiana he was awarded a Performers Certificate. The late David Baker personally picked the Buselli/Wallarab Jazz Orchestra to record his music.

He is a Yamaha performing artist and the Director of the Jazz track for the Music For All Summer Symposium. Mark resides in Indianapolis with his wife Andrea and daughter Sophia.